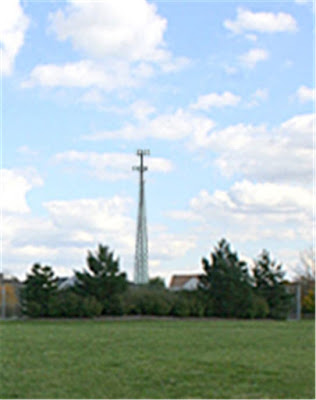 As I write this article on Thursday night, the paper of record in Crystal Lake has not yet run a story about the cellular tower than the Crystal Lake Park District proposes to rent to T-Mobile for $2,000 a month.

But the letter passing, phone calling and emailing of Ken Bird Park neighbors seems to have spooked the park board.

Word has reached McHenry County Blog that it looks like the board will have the cell tower re-zoning proposal taken off the Zoning Board agenda on November 5th.

Those who don’t think T-Mobile should be able to put a cell tower in the middle of a park should be prepared to attend the Thursday, November 6th park board meeting and speak in the public comment period.

And, yes, it is fine if you just attend, but telling the park board members why you oppose the cell tower would be so much more effective.

= = = = =
The picture of Ken Bird Park had a cellular tower added electronically by now Crystal Lake resident and Heck of a Guy blogger Alan Showalter.