The following postcard is showing up in McHenry County mailboxes.

It is imaginative in the extreme and may well be effective. It attacks the one-party nature of McHenry County’s Republican-dominated partisan offices. (No mention of all the Democrats on school boards, which levy the largest proportion of local taxes or municipal governments–think the 75% Aaron Shepley Crystal Lake city sales tax hike that went into effect on July 1st.)

On the address side are the names of all of the Democratic Party candidates. 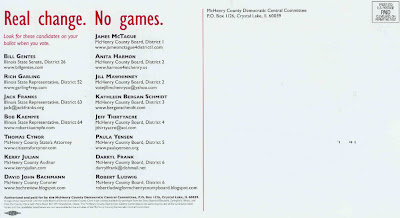 Plus their web sites.

Nice touch for those who might want to get more information.

On the back, however, is the 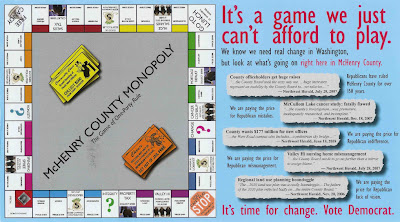 “The Game of One-Party Rule.”

Whoever put this imaginative piece together had a lot of fun.

Lot names are local towns. I wonder how people will take where the Dems have placed their hometowns on the board.

Who gets to be Boardway and Park Place?

I encourage you to click on the image to enlarge it so you can better read the descriptions on.

I wonder if they were alert enough to list the McHenry County Republican Cat Tax.

Regardless, there are mentions of pretty much every McHenry County Republican mistake and abuse of power that I can remember.

In type probably big enough for you to read without enlargement are newspaper quotes with what appear to be fake headlines:

On top is the headline:

It’s a game we just
can’t afford to play.

Below the newspaper quotes appears

It must be fun to be a Democrat.