If you are one of those skeptical individuals who think teachers’ union leaders are sometimes less than truthful, here’s evidence to put your mind at ease.

All you have to do is read page 24 of the final signed Huntley teachers contract and compare it to the newsletter the IEA Region 54 sent to its teacher union members.

Agreement #1
The BOE and HEA will form a joint committee to review compensation for certified staff members include:

Current salary schedule – the committee will make recommendations to the Board of Education for alternative schedules.

Retirement compensations – the committee will recommend a salary structure for all retiring staff members (emphasis added).

Here’s what the recent IEA newsletter says about the settlement of the Huntley teachers contract:

“A Four Years at 6% agreement was worked out for retirees.  A joint committee will negotiate the language.  The Board will accept letters of Intent this spring and implement the 6% increases beginning in the 2009 school year.”

But there is no agreement in the Huntley contract to give retirees 6% raises. 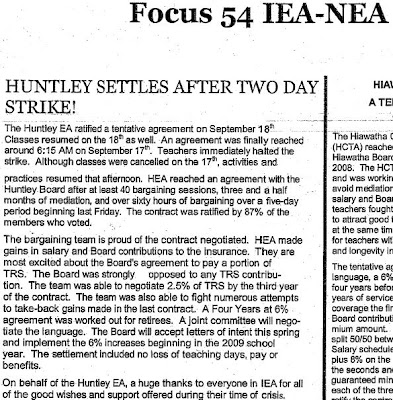 Teachers in other McHenry County school districts are apparently not supposed to find this out.

How would they find out?

They are supposed to be impressed with how great a job their IEA professional negotiators did in Huntley.

It’s easy to impress someone if you make up accomplishments.

Who’s going to be the wiser?

Why would teachers reading their union newsletter mistrust its author?

But, in Huntley’s case, what they wrote was fiction, rather than non-fiction.

What’s the chance of the IEA leaders ever getting caught and exposed in the media?

None because newspapers don’t assign reporters to cover a “teacher union beat.”

Local papers don’t even cover unions when they are sued in federal court.

And, besides, with beats at papers like the Northwest Herald having been doubled, who has the time?

Huntley’s teachers going on strike certainly is the public’s business.

But some insight into how the IEA manipulates its teachers into thinking teachers in another district are specifically getting more, when it isn’t true, may be relevant and deserving of public scrutiny.

IEA Uniserve Director Susan Goudreau’s name is on the newsletter’s masthead. Goudreau was on the Huntley teachers’ negotiating team. Surely she knows what is in and not in the agreement. 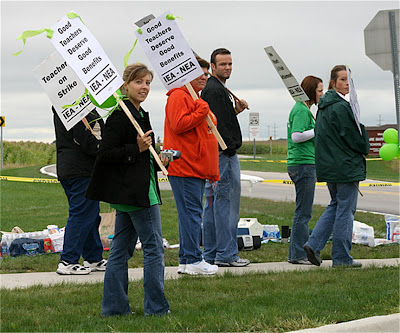 “The bargaining team is proud of the contract negotiated.”

This is especially interesting seeing how for a month after the teachers ratified the contract, the Huntley co-presidents wanted to renegotiate what they agreed to in writing.

Apparently union leaders can be “proud” and at the same time clamor for a contract “do over.”

The Board of Education got minimum monthly payments for both medical and dental insurance into the new contract, when there had been none. They add up to $240 per year. It’s safe to say that some teachers are very unhappy about that.

Don’t expect news of this to be in any IEA newsletter anytime soon, but there is no doubt the single teachers know.

Maybe bragging about something they didn’t get is common in teacher union newsletters.

Maybe the “Fair” in the IEA’s slogan of Fair, Competitive and Comparable means it’s fair for IEA leaders to not tell the truth to both the public and even its own teachers.

Apparently when teacher union leaders proclaim themselves “professionals” and “educators,” telling the truth isn’t part of their “professional” standard.

Maybe “educating” teachers with false information is par for the course.