As I mentioned in the first article I wrote on the subject, it would have come earlier had I not had a Cub Scout meeting to attend the night that Bill Cellini made his successful pitch to be the TIF developer at Vulcan Lakes.

As it turns out, Cellini was cited as Individual A in Tony Rezko’s indictment three days after Mayor Aaron Shepley’s city council voted to hire Cellini and his associates.

Northwest Herald reporter Karen Long figured out the connection in mid-December. The headlines and subheadlines were 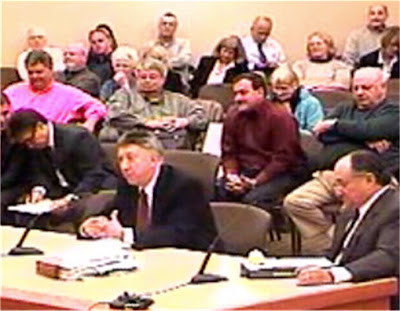 CL Mayor satisfied with letter saying
Cellini would not have a personal role.

Clearly Mayor Shepley had stepped into a tar pit.

The questions still remains about how Cellini, et al, found his way to the Crystal Lake City Council chambers. After I read the NW Herald article, I wrote,

“It should be noted, but is not by the Northwest Herald, that Cellini has long known former McHenry County Republican Chairman Al Jourdan. When Cellini was Secretary of Transportation under Governor Richard B. Ogilvie, Jourdan was Don Udstuen’s top assistant in Ogilvie’s patronage operation. IDOT had many, many patronage workers.”

I think you might find the conversation that Shepley had with Cellini of interest.

Here’s the longer version, just so you can see I have not taken anything out of context.

Here’s another story on Cellini on McHenry County Blog:

Nothing in the indictment relates to Crystal Lake.