In my mailbox, you would hardly know a was happening with pitches from 16th district Congressman Don Manzullo. 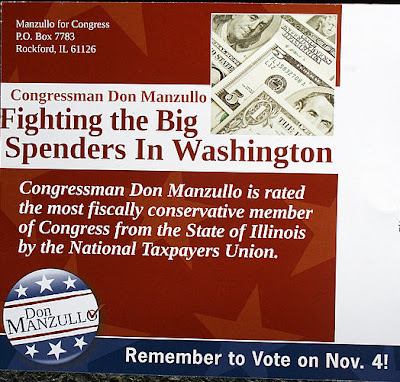 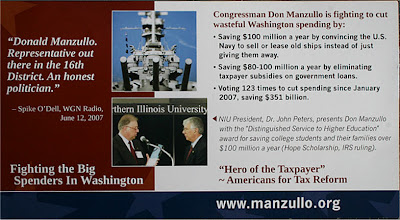 I see he is justifiably claiming credit to saving about $100 million a year for convincing the Navy to sell, rather than give its surplus ships.

I heard Manzullo talk excitedly about this policy change that he had just succeeded in initiated.

The piece repeats WGN’s labeling him as “an honest politician,” as well as pointing out how $80-$100 million a year is being saved “be eliminating taxpayer subsidies on government loans.”

The congressman also brags that he voted to cut spending 123 times since his current term began in January, 2007.

The theme of the piece?

Fighting the Big Spenders in Washington.

He notes that he is ranked as the most fiscally conservative congressman from Illinois by the National Taxpayers Union.