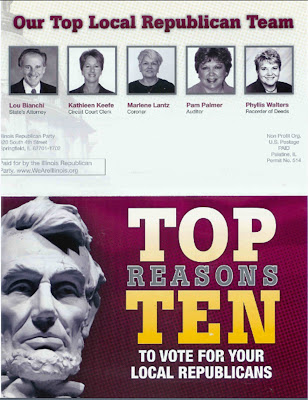 I’m looking at campaign disclosure reports on the “Most Recent Reports” page of the Illinois State Board of Elections and there’s a string of $1,296 contributions to each GOP countywide candidate.

The cost for each to the Illinois Republican Party is reported to be $1,296. The mailing is coming from Buford, Georgia, of all places.

Not only is Lou Bianchi, the GOP candidate for State’s Attorney getting that amount, but Phyllis Walters, the Republican candidate for Recorder of Deeds is credited with a similar contribution from the Illinois Republican Party.

And the same amount to Katherine M Keefe, the GOP candidate for Circuit Clerk.

Same for Pam Palmer, the County Auditor, who is running for re-election.

I think I am seeing a pattern.

I think it is for the joint mailing I wrote a story on Friday. That’s where you can read the “Top Ten Reasons to Vote for Local Republicans.”