Previously, I have written earlier about pro-abortion (and they really are pro-abortion) Personal PAC’s attack on Dan Duffy.

Besides the completely false “Woman in Jail” piece you can see in the above link, I have copies of two other mailings (click to enlarge). (I’ve missed two others.)

First there is the “Back Alley Stairs” Piece. You can see it below:

Another Personal PAC attack piece can be seen below. They would call is the “Kiss or Tell” piece. Since it came just before Halloween and has “scary” writing, that’s how I labeled it. 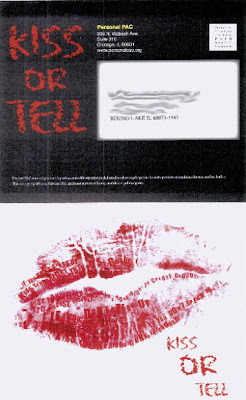 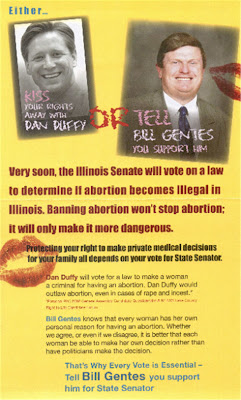 And Sunday night, while I was getting a positive, if misdirected (because I do not live in the 26th state senate district) robo-call from Gentes, Personal PAC was making calls, too. Only they were probably limited to the 26th District.

Personal PAC pieced together recordings of Duffy’s voice and interspersed Duffy’s comments with those of another person to damage Duffy still more.

Duffy says the only part of the message that was true was the tag line identifying Personal PAC as having made the phone call.

At $45,243.31, Personal PAC is Gentes’ largest contributor outside of Senate President hopeful John Cullerton, who gave $50,000. Contributions started last January and the reported ones go up to last Friday. I assume there will be more reported later. From in-kind contributions which have already been reported, I would not be surprised to see another mailing hit today.

It is an elegant and competently carried out campaign strategy that, in different permentations has worked since 1992, although it often has taken more than one election cycle to pick off an incumbent. (Personal PAC had to do it three times to beat me in 2000.)

You can imagine the confusion among the electorate.

And, a confused electorate is a volatile one.

Duffy is so angry that he is pledging to sue Personal PAC and its director, Terry Cosgrove, regardless of how the election turns out.