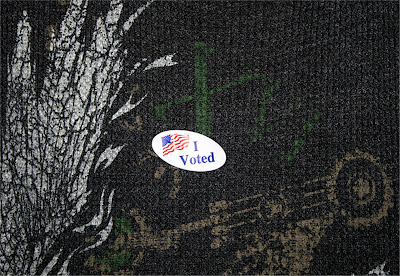 My son came home and said,

sticker with an American Flag.

I asked him how the election turned out.

He used colorful (not profane) language to describe his disapproval of Obama’s victory.

“We got to go in the voting booths. It was fun,” the eleven year old said.

While he was voting in his first big time election, I was trying to finish distributing literature from the Republican candidates who can’t afford postage.

I almost finished. I missed maybe six houses and I know a couple were filled with Democrats.