As I was looking at the front page coverage of the Camp Algonquin paddle boat tragedy, I thought of the story I wrote March 23, 2007, on the first boat on Crystal Lake.

The ice had just gone out and I saw these two teens on an obviously borrowed paddle boat.

Their friends were on the beach watching them as they spun the paddles.

It was warm enough for short sleeves.

They were having a great time smoking cigarettes.

And, it could have been as much of a tragedy as occurred on the Fox River had the paddle boat owner taken the boat’s plug out for the winter, as occurred at Camp Algonquin.

How big was the news?

Take a look at the front pages of the Chicago Sun-Times, the Chicago Tribune and Elgin’s Daily Courier-News below: 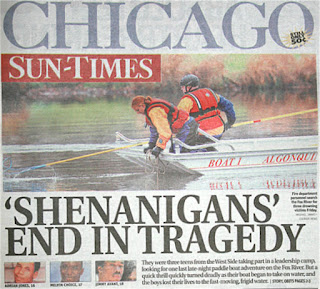 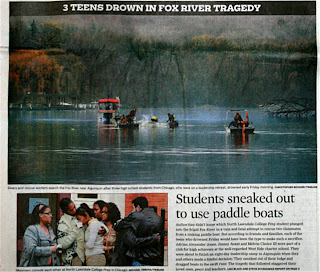 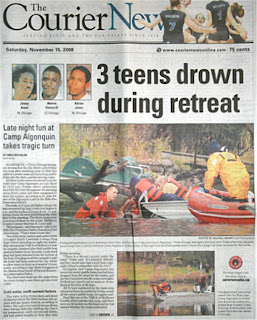 As you look at the Tribune photograph, note the spotlights on the river. A person who lives nearby told me about 3 AM Friday morning three large helicopters fly over his house. Their engine noise kept him awake most of the night.

It was surmised that they were Coast Guard helicopters and that their lights were providing the ability for the Algonquin-Lake in the Hills Fire Department to search for the three teenage boys.

The Courier-News reported that rescue boats were in the water 15 minutes after a 1:52 911 call was received.

The Tribune reported that half of the teens were outside and had dragged six paddle boats about 150 feet to the river.

You can count on the boats being chained to a tree from now on.

The young men who drowned were Adrian Jones, 16, Melvin Choice, 17, and Jimmy Avant, 18. All could swim, reports said.