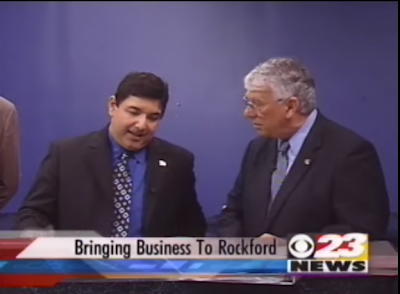 With the campaign successfully completed, 16th district GOP Congressman Don Manzullo points to “free-market strategies” to restore America’s economic health. The congressman voted against the $700 billion bailout, which U.S. Treasury Secretary Henry Paulson can’t seem to figure out what to do with.
Manzullo’s press release follows:

Manzullo, who opposed the $700 billion taxpayer bailout of Wall Street in favor of several proven free-market alternatives, said one strategy — accelerating the domestic manufacturing tax deduction — would give our companies a cash infusion they could use to sustain and create new jobs in America.

The American Jobs Creation and Economic Stimulus Act of 2008 (HR 5101), which Manzullo authored with Rep. Dan Lipinski (D-IL) earlier this year, would speed up the domestic manufacturing tax deduction to give manufacturers a larger tax break on the goods they produce in the United States.

The tax deduction – which Manzullo helped create in 2004 – currently provides a 6 percent tax rate reduction for manufacturers on the goods and services they produce in the United States. The tax rate reduction is scheduled to increase to 9 percent by 2010, but the bill would accelerate the phase-in to 9 percent retroactively to Jan. 1, 2008.

“This legislation gives our manufacturers an extra 3 percent cut in their tax rate immediately that they can use to sustain and create jobs in America,” Manzullo said. “It also provides a greater incentive for our manufacturers to keep jobs in the United States and actually bring some jobs back from overseas because they would pay a 9 percent tax premium on any work they send offshore.”

Manzullo supports several other free-market strategies to strengthen our economy, including:

= = = = =
Shown during a Rockford TV debate is Don Manzullo on the right and Democratic Party challenger Robert Abboud to his right. With only his left arm in the screen is Green Party candidate Scott Summers.