This week they got a reply from Water Well Program Coordinator Lawrence J. Mackey of the Lake County Health Department.

He writes (click to enlarge the size of the print below) he checked the construction report and had one of his staff call the well drilling company. And, you know what, the report says it was grouted.

Standard procedure, don’t you know, for a private well. 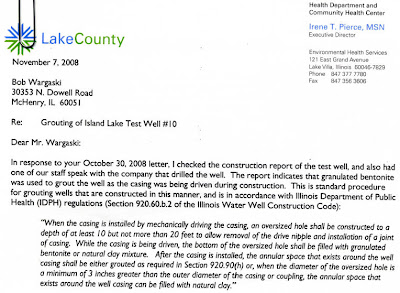 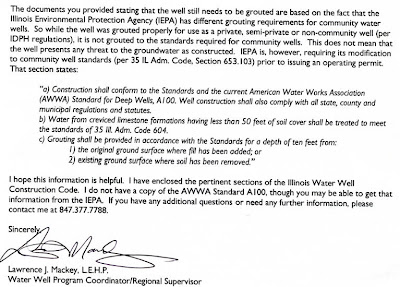 But, well, not for a public well.

No danger of contamination, though.

Wargaski called Mackey and, but, allow me to let him tell the story:

“I called him and said I absolutely understand that a driven well with bentonite around the casing as it is pounded in would fall into the minimum standards of the well code.

“I said there is one problem, I was there when they drilled the well and it was not driven in it it was oversized to a 12 inch rotary mud cut with a 10 inch pipe put in, leaving a 2 inch annulus around it, which was not grouted. 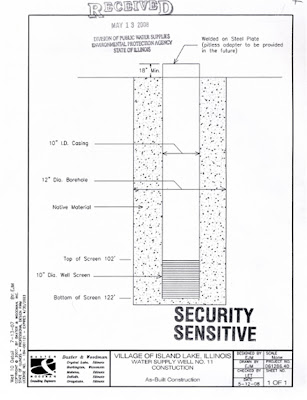 “In fact I also have the sketch (click to enlarge) from the IEPA submitted by the villages engineering firm drawn the day before the village received their ‘as built’ construction permit on May 13, 2008 that corroborates what I am saying. He said to send him the info I had from the IEPA and he was going to personally call the well driller to find out exactly what was going on.