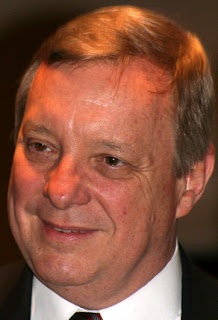 “If George Ryan gets out of prison because of Dick Durbin or any other politician, it will send yet another message that political connections defeat honestly, justice and fairness in government.

“Ryan treated us citizens with criminality and contempt. He should pay the full price the court demanded he pay.”

Any commutation would have to be granted by outgoing President George W. Bush.