The following press release has been received from Woodstock’s Dave Brady, Chair of the Libertarian Party of Illinois: 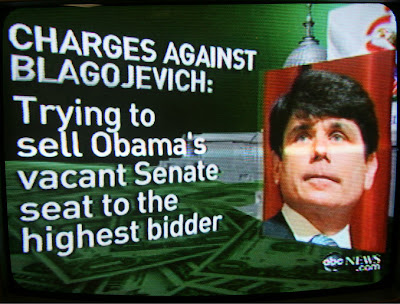 The Libertarian Party of Illinois (‘LP Illinois”) condemns the recent actions of Democratic Governor Rob Blagojevich and calls for his immediate resignation for the good of the State of Illinois.

Blagojevich was arrested on December 9, 2008, accused of scheming to profit from the selling of President-Elect Barack Obama’s senate seat for cash or for a political appointment. Charges against Blagojevich were detailed in a 76 page criminal complaint.

“This type of arrogant, outrageous behavior has become the norm among our elected officials and must no longer be tolerated in Illinois,” said Dave Brady, State Chair of LP Illinois.

“The citizens of this state deserve and must demand elected officials who serve honestly and with integrity,” he added.

“First, George Ryan, a Republican, and now Rob Blagojevich, a Democrat, abusing the public trust in an attempt to enrich themselves,” he said.

“I hope this sends a signal to the voters of Illinois and to the media that there really is no difference between the two major parties, and more choices are needed,” said Brady.

“We fully expect to provide an alternative candidate for governor who is well qualified, accountable and responsive,” he added.

“I challenge all media to provide equal attention to all third parties during the next campaign for governor,” he added.