When I was running on the Libertarian Party ticket against Democrat Rod Blagojevich and Republican Jim Ryan for governor in 2002, they both acted like chickens.

The rules of the game in previous statewide elections were that the Illinois League of Women voters sponsored one of the debates. The League had said that anyone who got 5% in a recognized poll would be included.

Knowing that, in our campaign Ted Semon, my campaign manager, started running radio ads in August. Then the Daily Southtown took the largest poll of the year—about 1,000 respondents.

Low and behold, the newspaper had me polling over 5% the week.

So what did the power party candidates decided to do?

The next week they decided to stiff the League of Women Voters.

With more state governmental experience than my two opponents combined, you will excuse me if I concluded that they were afraid to debate me.

The two decided to have the first debate in Rockford.

Just the two of them.

By then, we had come up with the two-headed chicken idea and a Rockford establishment produced the costume.

The week before the election, we repeatedly ran this ad in the cheap Rockford radio market:

Announcer 2 No, it’s not. It’s JimRod, the two-headed chicken who running for Governor. Let’s listen in. 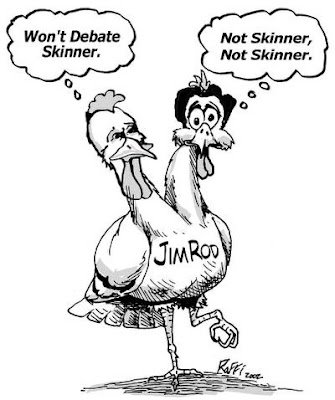 Announcer 1: What are they talking about?

Announcer 2: Sounds as if JimRod doesn’t want to debate Cal Skinner, the Libertarian Party candidate for Governor. I wonder why.

Announcer 1: I don’t know. Maybe JimRod is afraid Skinner will bring up some new ideas.

Announcer 2: Well, new ideas are something JimRod certainly doesn’t have, but nobody’s voting for Skinner.

Announcer 1: That’s not what the polls say.

Announcer 1: I guess they’re all afraid of new ideas.

Announcer 3: Vote Libertarian for a change.
Vote Cal Skinner for a REAL CHANGE.

We previewed JimRod in front of the Tribune Tower before driving to Rockford.

“‘We have selected a two-headed chicken to symbolize our opponents Jim Ryan and Rod Blagojevich for two reasons,’ Skinner said. ‘First because Jim and Rod have so many positions that are so similar. Secondly, because they refused to include us in the gubernatorial debates.'”

We got to the debate site early enough to park across the street from the theater, but police forced us to more to the side street after they saw the signs on the SUV.

Of course, both Rod and Jim went in the back door of the Coronado.

A tall man who shall remain nameless became Jim-Rod, the Two-Headed Chicken. As I and others handed out literature, he entertained those coming into the Coronado Performing Arts Center, explaining who he was.

And this back door behavior continued throughout the campaign.

It just so happened that Rod’s supporters were on that side. Jim’s were at the front of the building on the south side.