We looked at the first 2002 gubernatorial debate. It’s usually sponsored by the Illinois League of Women Voters, but, when I received 5% in the Daily Southtown 1,000-person poll, Jim Ryan and Rod Blagojevich, the two power party candidates, decided to skip it.

The Rockford Register-Star agreed to exclude yours truly, so the first debate was in Rockford.

JimRod was unleashed on the public that day, first in Chicago and, then, in Rockford. 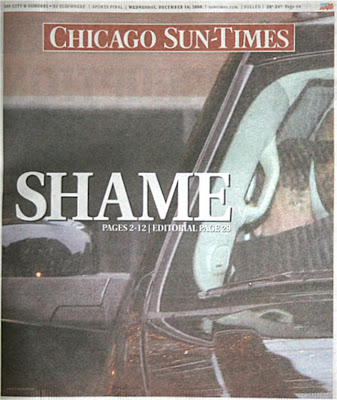 It just so happened that Rod Blogojevich’s supporters were on that side. Jim Ryan and the Republicans were at the front of the building on the south side.

That’s what would have resulted had Blagojevich and JimRod appeared in a newspaper photograph.

Part 3 tomorrow.
= = = = =
JimRod, the Two-Headed Chicken, cartoon was used in my 2002 Libertarian Party campaign for Illinois governor against Jim Ryan and Rod Blagojevich. Back then both candidates were chickens because they would not debate me and because they would not even walk past me on the way to their power party debates. They went in back or side doors of the debate sites.

Now temporary Governor Rod Blagojevich ducks into cars like the one on the front page of Wednesday’s Chicago Sun-Times. The photograph is a variation of “Where’s Waldo?”