The article two days ago described why and how JimRod, the Two-Headed Chicken, was introduced first in Chicago in the Plaza below the Tribune Tower and, then, in front of the Coronado Theatre. The one yesterday told how Blagojevich entered the Old State Capitol in Springfield for a debate sponsored by the Illinois Broadcasters Association by ducking down the stairs into the underground garage to avoid passing JimRod.

A trip to Springfield’s Old State Capitol followed for a debate between the two power party candidate in front of radio microphones.

Jump ahead to the WTTW debate.

It was miserable weather and we had a hard time getting someone to wear the chicken suit even though no one would know who was subjecting himself to such degradation.

We were are the main entrance handing out information.

The two power party candidates decided to go in the back door.

Lt. Gov. candidate Pat Quinn came in the front door and he and I had a pleasant conversation. I first ran into him, so to speak, when he worked in Cary for Fox Valley Systems. I taught him about appealing real estate assessments. He got fired for talking on the phone while he should have been working, the company owner told me.

Fast forward to the WGN debate.

The station manager banished JimRod, the Two-Headed Chicken, and anti-Peotone Airport demonstrators, to the edge of the driveway, but allowed me to stay at the main entrance. He was not a pleasant man.

All the other TV stations’ cameras were there.

A black SUV went came in the entrance and circled around the back of the parking lot. It pretty much went past my car, I was parked so far back.

All of a sudden the cameramen went rushing to the side of the building. 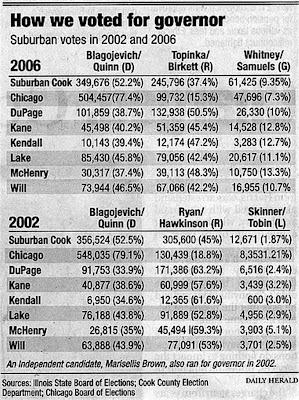 It turns out that both Ryan and Blagojevich didn’t want to walk past me into the WGN studios.

Even though JimRod was 200 feet away.

That night was my only experience with Rahm Emanuel. As he walked by, my impression was that he was the coldest fish I had ever seen. He wouldn’t take my literature.

So, I wasn’t surprised when, in May, 2003, Blagojevich went down the back elevator in the Capitol and through the basement to the parking lot entrance next to the garbage dumpster.

But, the “ignore Skinner” strategy worked, as you can see by the vote totals printed in the Daily Herald Wednesday.

Clicking on an image will enlarge most of them.