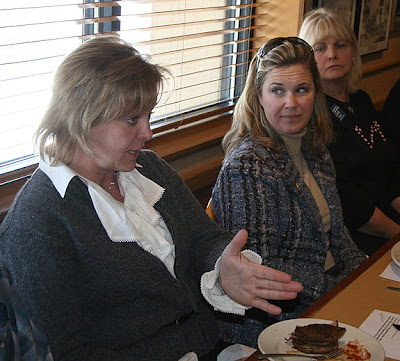 Operation Click, the seat belt encouragement program that started in Crystal Lake has been extended to Richmond-Burton and Johnsburg High Schools with major help from the Richmond-Spring Grove Kiwanis Club.

The two high schools are grouped with McHenry East and West High Schools, plus Wauconda, in a district for which the Gary Lang Auto Group.

The McHenry car dealer on Route 31 will provide a new car to one student from the five schools.

Here’s a story about the award luncheon two years ago.

The program used to be called “Operation Cool,” but the Illinois State Police had a similar program and refused to relinquish the name.

= = = = =
Ronda Flumetto can be seen explained her club’s role in Operation Click in the foreground. Club President Heather Spyra is to her left.