Warning: Parameter 2 to wp_hide_post_Public::query_posts_join() expected to be a reference, value given in /srv/users/serverpilot/apps/wordpress/public/wp-includes/class-wp-hook.php on line 292
 McHenry County Supervisor of Assessments Donna Mayberry Thinks “Negative” Multipliers May Be in Offing Next Year - McHenry County Blog ↓
McHenry County Blog Home

Every year there is a meeting of township assessors led by county supervisors of assessment.

It’s a meeting where new laws are explained, information compiled by county assessment employees is distributed and questions are answered.

As far as twelve township assessors were concerned, the highlight might have been the handing out of forms to apply for an annual $3,000 bonus from the state for meeting certain performance standards.

But taxpayers would have probably focused on Supervisor of Assessments Dpnna Mayberry’s comments on trends in local assessed value.

She pointed out that foreclosures were “still coming in at a record rate—800 more than the year before.”

The county assessment level for 2008 is 33.54%, according to preliminary calculations. A second edit removing all sales that are not arms length transactions might change that figure. 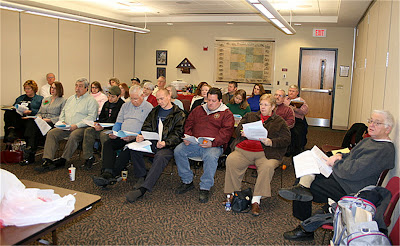 “Just because the market took a dive doesn’t mean people are overassessed,” she continued.

She did say that some areas in new subdivisions may be overassessed.

Since the township multipliers are based on three-year averages, Mayberry thinks,

“we would probably be looking at small negative (multipliers) next year.”

Instead of seeing a, say, 1.03% increase from the county level, it might be a .98% figure multiplied times this year’s assessed valuation.

As I have pointed out several times before, the amount that tax districts can collect is limited in total by the increase in the Consumer Price Index, plus assessments of new construction.

Tax rates are below their statutory maximums for all tax districts, I would guess, because property values have gone up so much more than the CPI since the tax cap was imposed by state law.

Whenever assessed valuation increases more than the cost of living, a taxing district’s tax rate is decreased by the county clerk to keep the district from getting more than the increase allowed by the tax cap.

That’s complicated, but it means, even if your assessment a year from now goes down, don’t expect your tax bill to go down.

My guess is that there will be all sorts of homeowners who don’t understand this and they will be “mad as hell.”

I figure the only way for a tax district’s tax bill to go down is if the tax district spends less money.

Anyone think any tax district will do that?