It’s mid-December and I have shoveled our moderately long driveway what, eight times?

I’m getting tired and winter has hardly begun.

When my wife told me that it was going to snow 7-10 inches today, I finally decided to get out the old snow plow.

I had it repaired when we were were first married 18 years ago.

I haven’t used it since.

It’s been stored so far in the back of the garage my wife didn’t even know we owned a snow blower (or do you spell it “snowblower.”)

I figure snow shoveling is my winter exercise. 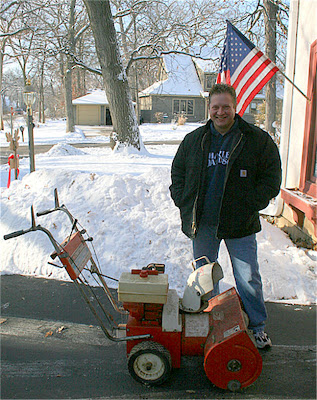 So, I called Mike Wonnacott, a friend of my computer guy, Richard Rowland. They both live pretty close to me in southwestern Crystal Lake.

He drove over in his snow-covered pick-up truck and we loaded the Sears Craftsman snow blower.

Now, unfortunately, I have insufficient forethought to have had it tuned up before.

So, I shall be shoveling snow several times more tonight and tomorrow.

If you would like small motor repair, including lawn mowers, Mike Wonnacott’s phone number is 847-477-4917.

He’s an airline mechanic in his real job. He calls the other one

And my wife got a bonus.

I come from a long line of pack rats. My grandfather Roy Skinner build a poll barn in Crumpton, Maryland, to keep his stuff in after he retired, for instance.

Both my mother and father saved stuff. Lots of it is still down in the basement, along with too much of my “stuff.”

The most disorganized part of my “stuff” is what came when I cleaned out the legislative office in late 2000 and early 2001. It’s still taking up space in the half part of our 2½ garage.

Yesterday I got rid of a whole box (not a big deal to anyone but me). 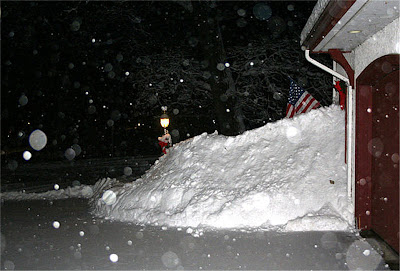 By next week, I’ll be ready for the white stuff.

The lawn mower is back in the corner where the snow blower used to be, so there’s a convenient place to store the machine that will make my arms and back feel less tired.

And, after I finish tonight, I can look forward to a nice hot bath.

Got to finish “The Venetian Betrayal” by Steve Berry.