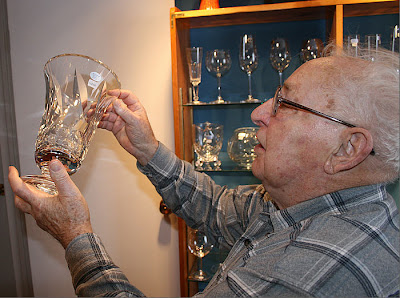 If you are unsure what to get a loved one, but want to make it special, may I suggest visiting the home of Kurt Strobach?

The Czechoslovakian-born glass cutter lives in Crystal Lake’s Coventry a block west of Canterbury School at 855 Teverton. Best to call first. His number is 815-459-7377.

Strobach uses techniques that you won’t find in commercial crystal.

His wheels turn toward him.

OSHA would definitely not approve.

While the mass manufacturers dip their cut crystal into acid baths to get rid of the burrs, Strobach uses an emery wheel. 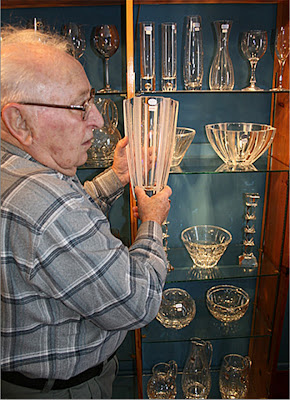 The result from Strobach’s method is a much sharper cut, which brings more brilliance to his pieces than I’ve seen in any other crystal.

Waterford just does not compare to Strobach’s work.

Prices range from the $20-$30 area to several hundred dollars. The one you see Strobach holding at the top of the story costs $110.

The one to the left—a bold new cut just developed this year—is priced at $89.

(Click on this particular photo and look closely and you will be able to see what my wife is getting for Christmas. Tell her and I will miss a look like this on Christmas morning.

Below is a one of at least six display shelves. 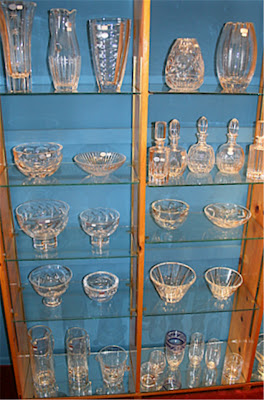 Look down to the lower right on the the next to the bottom shelf and you will see one of Strobach’s recent inspirations.

When I first saw it it reminded me of a star burst. 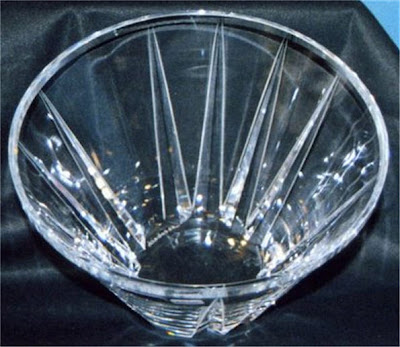 His cuts radiate up the sides of the bowls and are brilliant when placed in a sunny location.

Here are a couple of more shelving units filled with the master cutter’s work. 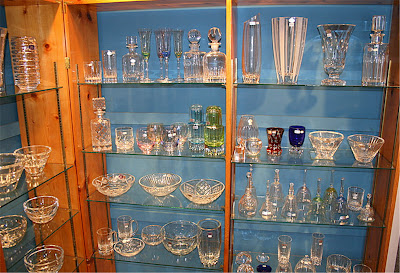 You can enlarge the photos by clicking on them, but I can assure you there are so much more brilliant than they appear here.

I call the big bowl on the bottom the “wedding bowl” because it is our gift to newly-weds. I have bought enough for my great-nieces and nephews.

I tell Mr. Strobach that after we are long gone, his bowls will still be stunning young people when they open their wedding presents.

The price of the big bowl has decreased from $99 to $89. The reason is that the Polish manufacturer has cut its prices this year. 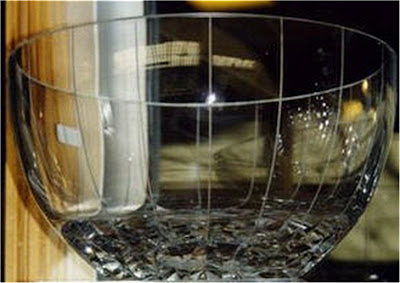 I took this picture in the Artesian Shop at the Illinois State Museum in Springfield (my son’s favorite museum in Springfield). Strobach’s work there costs twice what it costs in his home. See my “Top Shelf” story, which has close-up photos of much more of Strobach’s work and Strobach at one of his cutting wheels. Not all of the pieces are still available, but a number are. 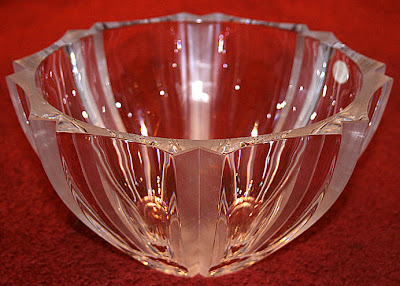 (Don’t point my wife to this story. Remember, she thinks I only write about political stuff.)

And what about this stunner at $129. It may be one of Strobach’s one of a kind creations. 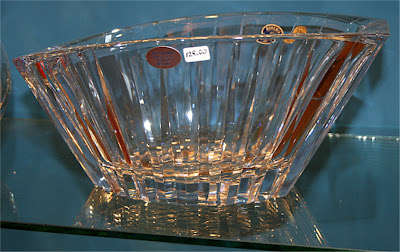 Lest you think everything is expensive, take a look at this sugar and creamer. I don’t see a price tag on the creamer, so I think you could buy the two for $34. (Call Strobach to make sure.) 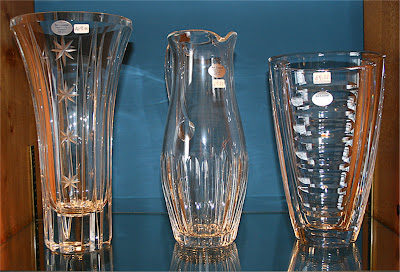 Three more pricey ones are below, but when looking at the cost, remember that it would be twice as much if sold retail. 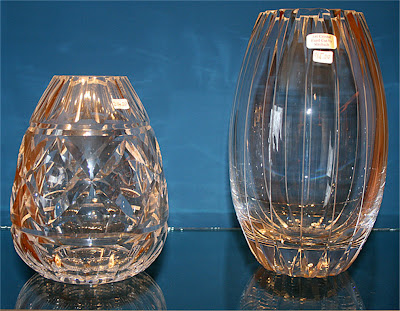 My wife and I are partial to the design on the right. It is similar to the one on the “wedding” bowl.

I know this is too long an article, but I keep finding photos that show how broad Strobach’s talents are. Look at this one, for instance. 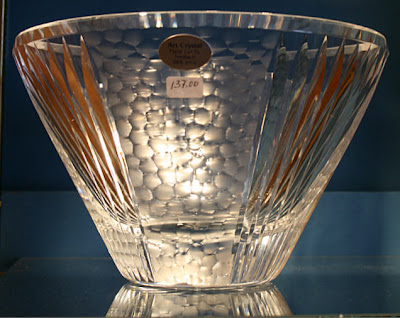 When I saw the rounded cuts on its side, I thought of the copper cigarette tray I made in Boy Scout camp back in the 1950’s. 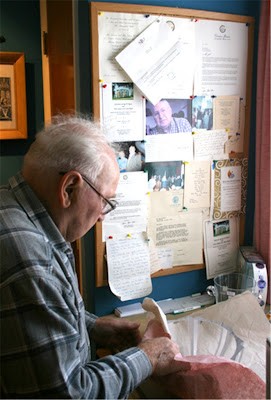 The cuts on both look as if they were made with a ball pean hammer, but you know it took a lot less skill to wield a hammer than to the make these cuts. The contrast between the round cuts and the straight ones give this bowl a character of its own. This is also a design developed in the last couple of years. It costs $137.

Don’t you wish you could be as creative as this artist when you are in your 80’s?

Strobach has provided his art crystal to two Illinois governors—George Ryan and Rod Blagojevich—but don’t hold that against him.

Ryan’s wife has good taste not only in crystal, but in earring backings. She was wearing some at a gathering Ryan held for Republican state representatives at the Springfield house the state rented for him. I admired them and she told me where she got them. Now they are in my wife’s jewelry box.

Strobach has a lovely note from Lura Lynn Ryan on his bulletin board.

You can also see a faded page from the book of Illinois artists for which she wrote the introduction. It’s the one with his picture on it.

I’ve gone over probably every day of the week, including weekends right before I have a party to attend.

If you are too far from Crystal Lake to drive over, Strobach will ship them to you, if it’s in the $100 range.