A funny thing happened on the way to the end of the calendar year.

The Consumer Price Index has been decreasing.

That is probably enough to earn an

from many tax district officials.

The “Consumer Price Index for All Urban Consumers (CPI-U): U.S. city average” is the percentage increase (until now) upon which the property tax cap is based.

This coming year, tax districts are allowed an increase in their “tax take” of 4.1%, plus new construction.

But look what is happening since August. It’s on the table below: 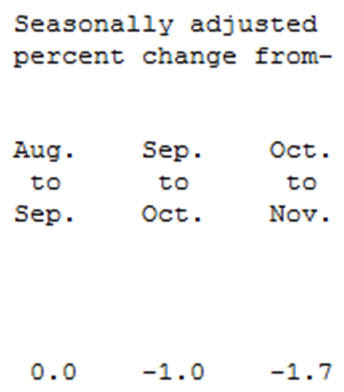 The cost of living was the same in September as it was in August.

From September to October, however, it decreased a seasonally adjusted 1%.

And from October to November, the seasonally adjusted CPI fell 1.7% more.

Will the CPI fall more than 1.1% from November to December?

Will their friends in the General Assembly change the tax cap law?

Will that offer legislative challengers the opportunity to label supporters of gutting the tax cap the title of “tax hiker?”

And the tip for this story? It came from CPA and Nunda Township Supervisor John Heisler.

For those in the Chicago metropolitan area, here is a press release telling what happened locally in the last month.