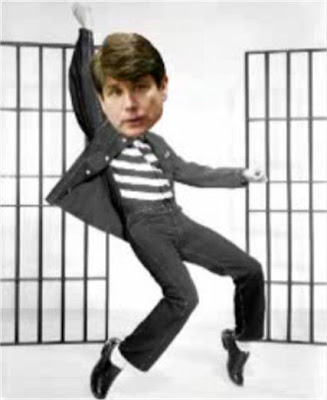 McHenry County Blog made a list of blogs about Governor Rod Blagojevich by a New York law professor, which led to my being contacted by Bruce Hopwell.

McHenry County Blog – Focuses on McHenry County (duh!) but now on the trail of Blago, with great screen shots of headlines and videos.

Hopwell sent me this email:

What do you get when you cross a corrupt Illinois governor with a double-murdering ex-NFL star?

Follow O.J. Simpson and Rod Blagojevich on the road to prison, and see all the loveable lawbreakers and famous felons they meet along the way. Check out “All-Star Jailhouse Rock” at http://www.youtube.com/watch?v=OBdkTaoavXI . Please feel free to post or just pass around.

Take a look and we think you’ll agree: what we do to this Elvis classic is criminal!

I asked him where he was from and got this answer:

But Chicago really is my favorite city — despite all of this nonsense!!

(And I once shot a commercial with Michael Jordan, so doesn’t that give me honorary citizen status or something?)

OK. Here’s his and his son’s parody: