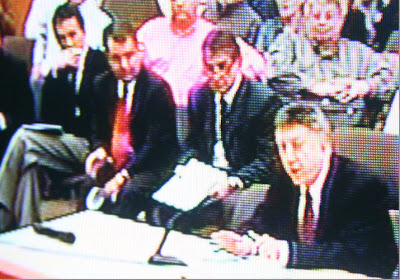 Too often have I lamented that I was at a Cub Scout meeting on October 10th, instead of the Crystal Lake City Council meeting, when Mayor Aaron Shepley led the way for the selection of Bill Cellini‘s development group.

Three days after the selection Cellini was implicated in Tony Rezko’s indictment.

Cellini, a quite skillful guy, subsequently pulled out of the deal. Later, as the economy tanked, the whole group took a walk.

Later, Mayor Shepley and the city council passed a 75% city sales tax hike to finance development of the Vulcan Lakes. That was the same argument used to support the Vulcan Lakes TIF district, leading me, a resident of Lakewood, a suburb of Crystal Lake, to think “double taxation without representation” every time I shop in Crystal Lake.

I worked as the campaign manager front man for Cellini in Springfield in 1971 in a mayoral campaign after newly-elected Illinois House Speaker W. Robert Blair sent his Clerk Fred Selcke down to tell House staffers that pretty much everyone but a couple of legislative mistresses (not revealed by Selcke, of course) that their services would no longer be needed.

So much for my being on the Appropriations Committee staff for which the outgoing Chairman Dick Walsh had hired me after I finished my term as McHenry County Treasurer.

If you want a longer version to put it context, click here. Cellini told the council in October that his colleagues and he had had lunch every week for thirty years. 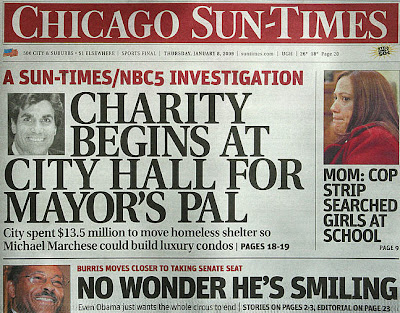 Yesterday on the front page of the Chicago Sun-Times is a story about a deal Cellini and Michael Marchese put together in Chicago. It involved how the city paid the Chicago Industrial League $1 million to tear down an empty homeless shelter in Greektown to make way for high end condos.

“Normally when the city provides such financial assistance for a development, there are strings attached:

“The developers must set aside one of every five condos as affordable housing. Or else they have to pay a hefty fee — about $4.2 million in the case of the Greektown project,”

Not with Cellini and Marchese, the story says.

And the money came from the Near West TIF district.

TIF districts are the developers’ best friend all over Illinois. They take money out of the pockets of local tax districts like schools, forcing those tax districts to take more money out of your pocket at real estate tax payment time in order to get the maximum amount allowed by law.

Marchese selected the demolition company, even though the Industrial League got the money for the tear down.

Local Alderman Walter Burnett (27th) says he didn’t know anything about it.

Marchese spokesman Rick Filler reported the cost for the property would have been $1 million more (to cover the demolition costs) had the city not picked up the bill. 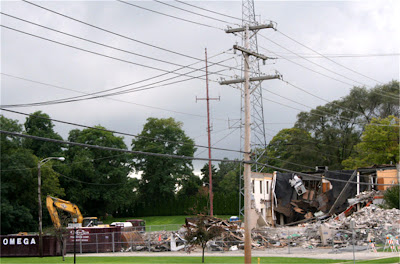 But the apparent ruse allowed the development group to avoid setting aside 20% of the units for affordable housing, as is required when Tax Increment Financing money is used to subsidize a developer in Chicago.

Word on the street in Crystal Lake is that Marchese’s people were eying the old Crystal Lake Public Safety Building site which the city council demolished in August of 2007.

The property remains empty, only its parking lot being of use. 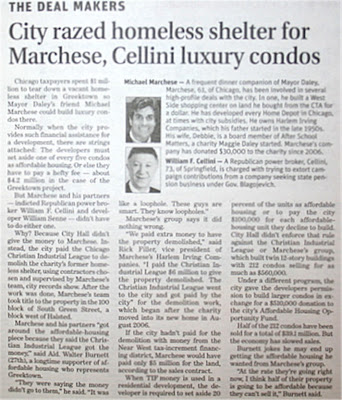 Here’s how Sun-Times reporter Tim Novak describes two of the people who sat at the table to make their successful presentation to the Crystal Lake Council:

Michael Marchese — A frequent dinner companion of Mayor Daley, Marchese, 61, of Chicago, has been involved in several high-profile deals with the city. In one, he built a West Side shopping center on land he bought from the CTA for a dollar. He has developed every Home Depot in Chicago, at times with city subsidies. He owns Harlem Irving Companies, which his father started in the late 1950s. His wife Debbie is a board member of After School Matters, a charity Maggie Daley started. Marchese’s company has donated $30,000 to the charity since 2006.

Images may be enlarged by clicking on them.