This past weekend it was cold.

So, naturally, that was the weekend selected (back when it was much, much warmer) for the First United Methodist Church of Crystal Lake’s Cub Scout Pack 158 winter campout.

It was not the coldest part of January, but Saturday night the temperature was below zero. 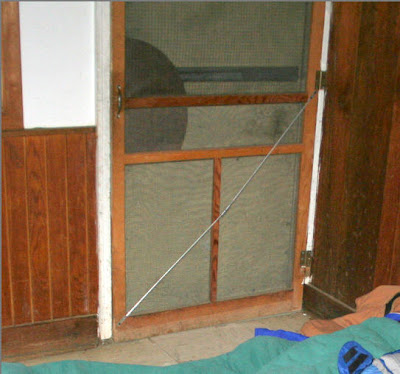 How cold was it?

On the left is one of the doors to the first floor of the two-story building where we slept.

On Friday night we did not feel the need to protect our mattress from the cold air seeping in around the leaky door.

Saturday night it was colder.

The breeze was strong enough and the below zero temperature low enough that the mother and son who had slept next to the door Friday night moved to the middle of the room to escape the breeze through the baseboard. She had taken the plywood from the unlit fireplace and put it in front of the door along with an accompanying large piece of cardboard.

The breeze continued pretty much unabated.

To try to minimize the leakage, I first put up my son’s towel from the swim practice on Friday afternoon. It was frozen solid in the five degree noon temperature when I went out to start the car Saturday, but had thawed out before nightfall.

The next morning, one of the boys said, “So that was the monster I was seeing when I woke up last night.” 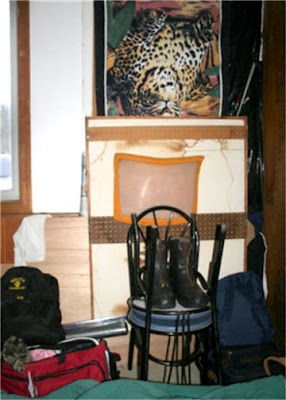 Next, I added a black garbage bag, which passed for my suitcase because I had sealed up our luggage after our return from Disney World without realizing that I would need one for this campout. Strangely, I did not forget to leave the sleeping bags and my sleep apnea suitcase in a closet that I could access.

When my wife, who went to a scrap booking overnight with a neighborhood friend, asked for one of her bags. When I hesitated and told her it was sealed up for the winter, she asked if she should buy a new one. At $21 at T.J. Max, I considered the one she found a bargain.

So I had a big plastic garbage to cover part of door not covered by the beach towel. I tacked it and another I found up with push pins, which I also used to attach the side of the towel.

“How about the bulletin board?” I thought. It’s bigger than the make shift fireplace cover.

I figured out how to get it down and leaned it against the bottom of the door, but it wouldn’t stay tight enough.

I wedged my sleep apnea suitcase between the mattress and the door. Then I pulled Steven’s friend’s duffel bag. I propped my son’s bag on its top.

The top of the bulletin board wouldn’t stay tight.

So, I added a couple of metal kitchen chairs.

And the detached back of a chair for leverage against the bulletin board.

And put the gollashes I bought to campaign in the snow in my unsuccessful 1982 primary campaign for Congress against Robert C. McClory. 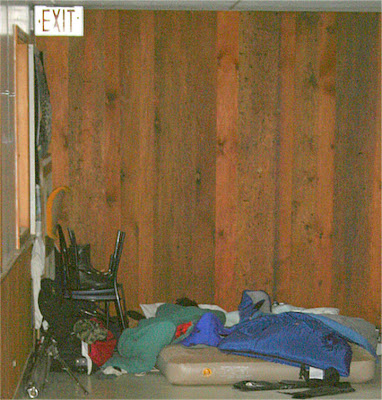 I also dragged a heavy metal projector screen and put it at the bottom, hoping to provide more stability.

The frigid air was still coming in around the edges, so I stuffed my son’s snow pants behind the top of the bulletin board.

I stuffed my sweatpants and dirty tee shirt down the crack along its left side. My son’s sweat shirt went in the crack on the door’s left.

When I finished I was glad that I didn’t have to pay to heat this building.

And I wondered how the Indians made it through the winter.

The church’s Boy Scout Troop 158 was scheduled to sleep outside in tents overnight.

Even though the troop came out Saturday, the leaders used good judgment and went home.

Although my son said he was cold when he awoke—the last to do so—on Sunday morning, I was comfy.

Of course, I zipped up my sleeping bag.

The room itself was comfortable. Undoubtedly the entire back wall underground and half of the side walls underground helped. The top floor—completely exposed on all four sides was considerably colder.