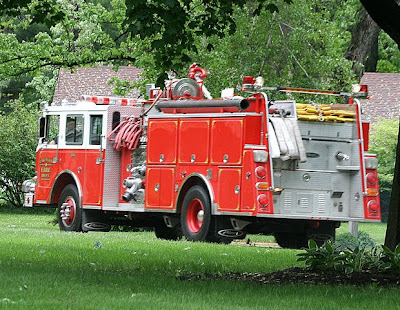 Erin Smith and John O’Hara are running for the Lakewood village presidency being vacated by Julie Richardson.

For the three village trustee vacancies, only three have filed petitions:

The fire engine is from the Lakewood Fire Department. The department was created January 1, 2007, as a result of the Crystal Lake City Council’s deciding to charge Lakewood based on something other than the marginal cost of providing the service. The result was the creation of a hole in Crystal Lake’s budget.

Crystal Lake officials argued that Lakewood residents should pay on the same basis as its own taxpayers did. That sounds reasonable, except that Lakewood is mainly composed of residential property whose fire protection does not cost as much to provide as it does for homes, plus commercial and industrial properties.

Lakewood officials figured out that they could provide their own fire protection for less money over the long-run than it would cost to continue buying the service from Crystal Lake.

The result is less than a logical way to provide public service.

Eventually, Crystal Lake officials will overcome their resentment of Lakewood’s decision and agree that Lakewood’s fire engines should serve Ryland Homes’ Bryn Mawr subdivision. In exchange, the Crystal Lake Fire Department could serve the Country Club Additions part of Lakewood (where we live).