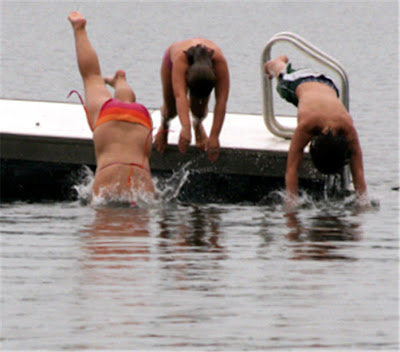 As one who won his first primary election on June 13, 1966, I would like to put in a pitch for a June primary.

There is plenty of light for a challenger to knock on doors after work. And, it is warm enough.

That, of course, is the reason the June primary was switched to March.

A June primary gives enough time to heal any wounds created by a primary contest.

There is adequate time between the primary money raising time and the necessary November fund raising, if one has a opposite party opponent. (Having a September primary might cause donor stress.)

My prediction that is that the primary will remain in February, a time of year when candidate manpower cannot be used to overcome candidate money.

It’s a date almost guaranteed to re-nominate the most incumbents.

I was looking for something summery and found this of teens diving off the raft at Lakewood’s Gate 7 Beach.

Summer doesn’t have the kind of wind chill today does.