The two county officials, neither of whom live in Grafton Township, also endorse Mike Romanelli, who is running against incumbent Township Road Commissioner Jack Freund.

Below is the endorsement letter: 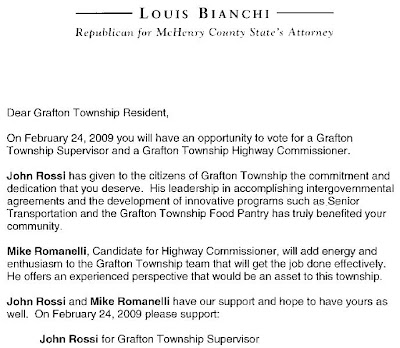 Huntley resident Linda Moore is mounting a challenge to Rossi in the February 24th GOP primary election, which, in effect, is the general election because there are no Democrats or independents running.

She is saying that Rossi should not have led the effort to put township taxpayers in debt to build new township offices for $3.5 million without asking voters permission in a referendum.