The Chicago Tribune’s memory is getting better. 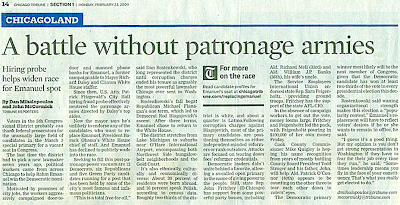 In yesterday’s article on the race to replace White House Chief-of-Staff Rahm Emanuel, Tribune reporters Don Mihalopoulos and John McCormick emphasize the fact that Emanuel won in 2002 only with the help of patronage workers from the Hired Truck Scandal gang.

It was so blatant that the U.S. Attorney mentioned the intervention in a footnote in the plea agreement of Water Department’s Director of Finance and Administration Gerald Wesolowski. He was Donald Tomczak’s bag man.

The Tribune did not remember this rather relevant fact in its puff piece, front page Sunday Magazine article November 12, 2006.

And, just in time to help the independent candidates, the United States Supreme Court has turned down Mayor Richard Daley patronage chief Richard Sorich’s appeal of his conviction for illegal hiring of patronage workers.