Warning: Parameter 2 to wp_hide_post_Public::query_posts_join() expected to be a reference, value given in /srv/users/serverpilot/apps/wordpress/public/wp-includes/class-wp-hook.php on line 292
 Picking Up a Piece Missed in Grafton Township GOP Primary - McHenry County Blog ↓
McHenry County Blog Home 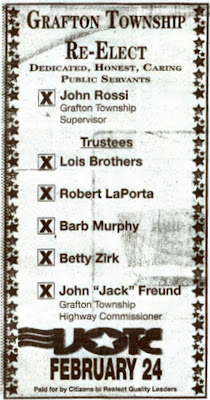 It supports all the opposed incumbents and was purchased by a pop-up committee calling itself “Citizens to Reelect Quality Leaders.” (Click to enlarge.)

The ad cost (I left the NW Herald a message requesting the amount for a quarter page ad on Friday morning; no reply so far).

Because the price paid was less than $3,000 no one the purchaser does not want to tell will ever learn know who paid for it.

So, here’s the mystery on which you speculate.

Who supported both John Rossi and Jack Freund and all the incumbent trustees?

The ad could be said to have worked for Freund, but not for Rossi.

I would note that advertising in newspapers is not a favored route for most candidates.

But some candidates and supporters still advertise late in a campaign when they are desperate. It is a way to spend a fair amount of money at the last minute.

The problem is one can end up having one’s ad put somewhere in the paper where readership is light.

The last ad I placed in the NW Herald was in my primary election campaign in 1996. It advertised a real estate assessment appeal seminar well before the election.

It had political overtones since I successfully led the 1970 real estate assessment revolt to the Illinois State Property Tax Appeal Board. It lower 14 new homeownes’ assessments from 60% of market value to 42.6% (or whatever I proved the median average to be–might be off by a couple of tenths of a percentage point).

But the meeting, held at Martinetti’s, also was a public service.

The NW Herald put the ad on the obituary page, even though it had been running much, much smaller ads on page three for someone charging to help people appeal their property tax assessments.

I concluded that ad placement in the NW Herald had more to do with whether the paper supported a candidate than anything else.