What kind of candidates’ forum will not allow candidates to make a comparison between their different positions in a two person race?

One sponsored by the Huntley teachers union.

There is a two-person election for a two-year term in Huntley School District 158.

Mike Skala, the school board president who was narrowly defeated two years ago and appointed when his buddy Jim Carlin conveniently resigned six months into his term, is running against Larry Snow, who is completing a four-year elective term.

It’s the only contest on the school board ballot.

The Huntley Educational Association, which at one point had Mike Skala’s wife as one of its leaders, is sponsoring the forum.

No neutral observer would suggest that the teachers union is not supporting Skala. 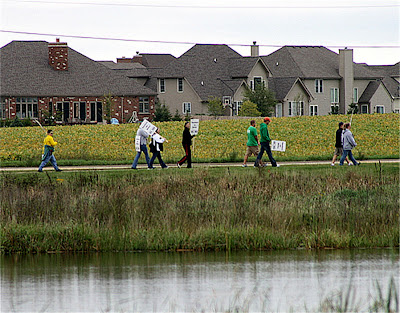 So, union leaders have set forth forum rules that prohibit the making of comparisons between the two candidates.

No comparisons in a political race?

Aren’t comparisons what political campaigns are all about?

Is it even possible to have an issue-oriented political forum when the ground rules prevent a candidate from contrasting his positions with those of the other candidate in a two-person race?

Why not just have a coronation?

Apparently the teachers union wants a re-play of the 55-cent tax hike referendum campaign in which Skala refused to debate the financial facts with Snow.

And that’s what those attending will get. 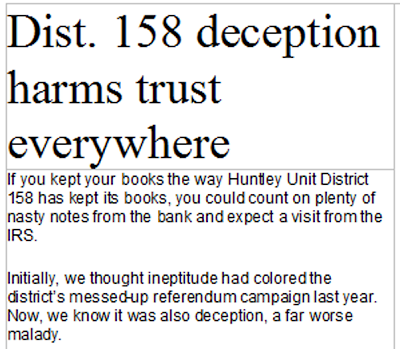 The ground rules prevent Snow from pointing out Skala’s record of running the district as board president, with “all of its scandals like depreciating 100 buses that didn’t exist, deceptions and corrupt practices, including nepotism, that became headline news,” as Snow puts it.

It prevents Snow from pointing out how Skala voted for deficit spending and selling off the school buses the district owned outright to pay for a huge teacher union pay increase.

Could it be that the teachers union wants to protect Skala from inconvenient truths?