Warning: Parameter 2 to wp_hide_post_Public::query_posts_join() expected to be a reference, value given in /srv/users/serverpilot/apps/wordpress/public/wp-includes/class-wp-hook.php on line 292
 Elgin Teachers Say, “Show Us the Money” - McHenry County Blog ↓
McHenry County Blog Home 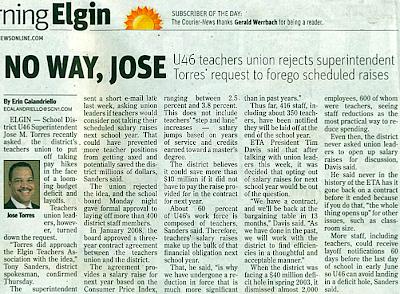 So Torres sent an email to teacher union leaders asking “if teachers would consider not taking their scheduled raises next school year.”

That would have saved about $10 million.

“That could have prevented more teacher positions from getting axed and potentially save the district millions of dollars,” the district spokesman said.

The headline summarizes the union reply: 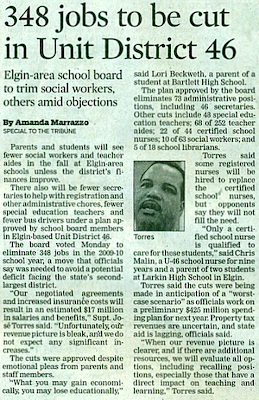 The union rejected the idea, and the school board Monday night gave formal approval to laying off more than 400 district staff members,” the article reports. 350 were teachers.

“Our negotiated agreements and increased insurance costs will result in an estimated $17 million in salaries and benefits,” Torres told the Tribune. “Unfortunately, our revenue picture is bleak, and we do not expect any significant increases.”

“We have a contract and we’ll be back at the bargaining table in 13 months,” Elgin Teachers Association President Tim Davis told the Courier-News.

The January, 2008, three-year contract calls for raises based on the CPI, “ranging from 2.5% and 3.8%,” not including step and lane increases. Those are based on number of years worked and graduation education credits.

The increase in the Consumer Price Index this past year was one-tenth of one percent.