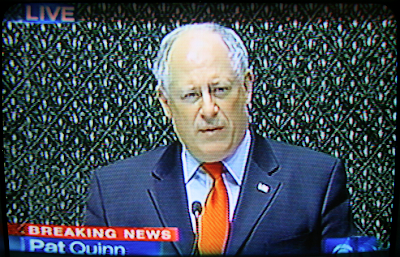 In their biography of former Governor “Dan Walker, the Glory and the Tragedy,” Taylor Pensoneau and Bob Ellis, write of the role of Pat Quinn in the 1972 primary election campaign.

Quinn first appears in a couple of sentences about the primary election on page 139 of the biography:

“Populous Madison County obviously posed special problems for the Walker campaign in regard to organizing and other tasks.

“Consequently, several weeks before the primary, a 23-year old Chicagoan who had become a top troubleshooter for the campaign, Patrick Quinn, was dispatched to Madison.

“Almost overnight, the tireless Quinn pulled off a headquarters opening and galvanized scores of impressionable college students to go to bat for Walker.”

Tomorrow – What Quinn Did in College?

= = = = =
The photo of Patrick Quinn was taken right after he was sworn in as Governor of Illinois, replacing impeached Governor Rod Blagojevich.