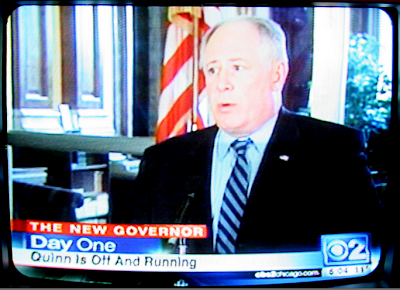 In Taylor Pensoneau’s and Bob Ellis’ biography of Dan Walker, “Dan Walker, the Glory and the Tragedy” is information on how Governor Pat Quinn apparently got his start in electoral politics.

Besides his primary election role, there is a bit about what he did in the 1972 General Election campaign.

On page 168, Quinn is described as

“the hard driving Patrick Quinn, by then campaign director for southwestern Illinois.

“…people like Quinn were supposed to be paid,” according to Steve McCurdy, but “I doubted it because there did not seem to be any money.” He said Quinn “ate” his expenses.

“Quinn was an interesting case,” the authors explain, “if only because of the unusually strong impression he made on those he encountered and because of his frenetic activism in Illinois pubic life in the years to follow.

“Thinking back Sue Kolker recalled that ‘Quinn seemed to be everywhere at once, soothing the Walker to keep them going and yet trying to play games with the regulars by telling them the Walker effort was no longer completely independent. So serious and still humorous about it all, I never saw a politician work harder. He only slept a few hours a night.”

= = = = =
The photo is of Governor Pat Quinn on his first day in office after he took over form impeached Governor Rod Blagojevich.