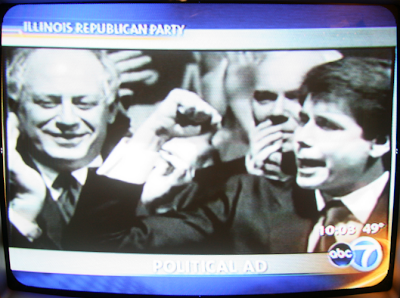 The title of former Governor Dan Walker’s biography is “Dan Walker, the Glory and the Tragedy.”

Written by Taylor Pensoneau and Bob Ellis, it reports on page 355 what Pat Quinn thought of Walker’s term as governor.

Playing off Blackburn College political science professor John Forbes’ opinion that Walker had fallen “from a very promising guiding light in the Stevenson tradition to a largely confusing mishmash,” the book says,

“Patrick Quinn would not go that far, but he too was not satisfied that the full potential of Walker’s governorship was being fulfilled when the young political activist left Walker in 1975 after holding a series of posts in the administration.”

Tomorrow – Why did Pat Quinn leave the Dan Walker administration?

= = = = =
Here’s a picture of Pat Quinn standing in the background as the man he replaced as Illinois Governor, Rod Blagojevich, speaks. The photo was in an ad run by the Illinois Republican Party.