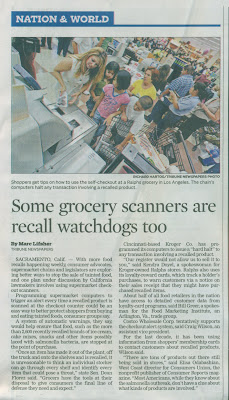 Legislators are always looking for headlines.

One in California, State Senator Dean Florez, wants to mandate grocery stores to make sure they do not sell recalled items.

He says current supermarket scanners have that capability.

Undoubtedly he is correct.

But the scanners also capture information about items purchased.

Sam’s Club, for instance, could figure out I bought the same book twice and gave me no problem when I asked for a rebate for the second copy.

And Sam’s Club also surprised me when it sent me a letter telling me I had purchased peanut butter crackers which many have contained contaminated peanut butter.

Of course, the crackers had already been sold at the McHenry Marlins concession stand.

But, it certainly showed the scanner capability was there and that Sam’s Club was ahead of the legislative curve.