In 2006, there were two open space referendums on the ballot in Nunda Township.

One passed and the other narrowly lost.

You can see the parcels that were identified two years below (click to enlarge this image or any other): 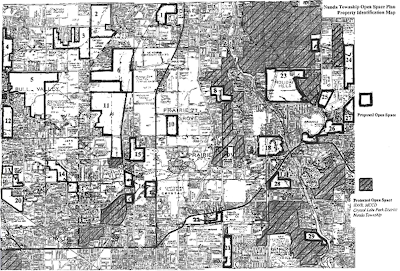 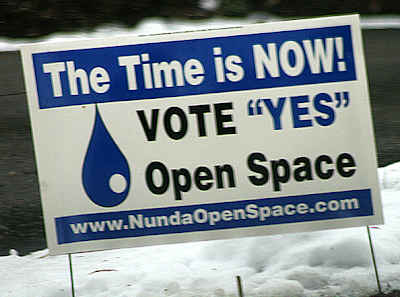 Supporters organizing themselves for the campaign as “Nunda Neighbors for Open Space” obviously thought the vote was close enough to try again. This time for $15 million.

Their web site estimates that a $350,000 home would pay $63 annually for the 20-year period the bonds would be outstanding.

The issue re-surfaced at the Nunda Township meeting last year when Democratic Party Chair Kathy Bergen Schmidt made the motion to put the funding referendum on the ballot. Brian Weaver, who ran in the Republican primary for township assessor, seconded the motion. According to the comment left below by Schmidt, the vote to put the referendum on the ballot was unanimous. She reports that all of the “Team Nunda” candidates attended the meeting.

That motion obligated the township to place the issue on the ballot.

“Team Nunda remains neutral on the Open Space Referendum to sincerely support the choice made by the Nunda Township voters rather than promote any personal agendas.” 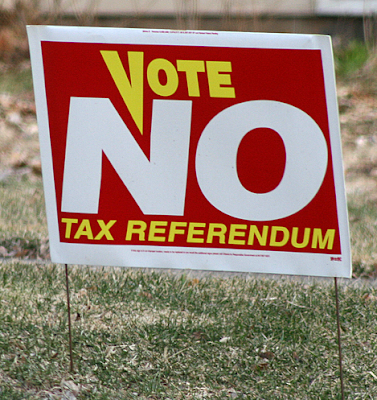 It appears the GOP slate is trying to put a little distance between themselves and the tax hike effort.

Meanwhile McHenry County Libertarians are putting on a campaign against the referendum.

An article on the party blog says, in part,

“While unemployment is skyrocketing, the stock market crashing and people worry from day to day about finances our leaders close their eyes to reality and suggest more taxes. Some people say, ‘but Dave, it’s only $$$ a year, what’s the big deal?’ I answer that with this question … ‘Ok , ____, give me a tax number that is enough then.'”

Endorsing the referendum, according to proponents’ direct mail piece, are

Below is the additional information that proponents have mailed out: 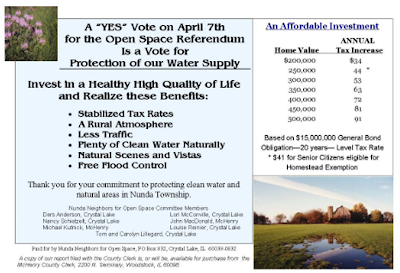 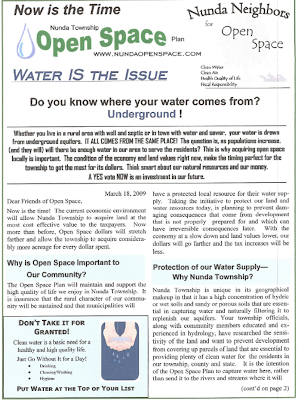 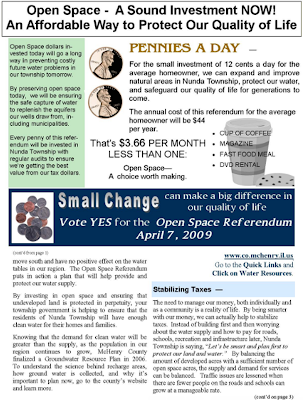 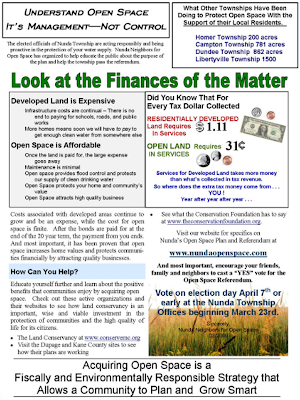 The pitches being made include one that more open space will preserve shallow aquifer rainwater recharge areas, as well as curtailing demand in the area. (Remember to click on the image to make it large enough to read.)

Another is that it is cheaper to buy the land and pay the cost of its purchase over 20 years than to subsidize the houses that otherwise would be built on the properties. The argument is made that it costs 31 cents for every tax dollar collected to provide services to open space, but $1.11 for each tax dollar to service homes.

The committee argues that with the depressed price of real estate and the low interest rates, this is the best time to buy land.