A mailing from Huntley School District 158 school board re-election candidate Larry Snow, being hotly opposed by appointed incumbent Mike Skala, arrived after the postcard from his opponent. 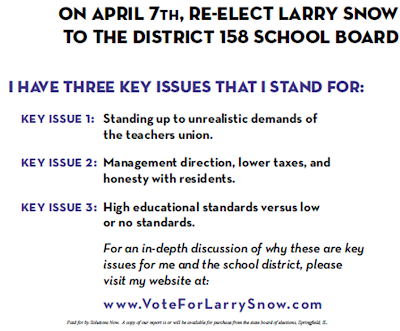 On the address side, Snow lays out three reasons for re-election:

He points folks to his web site—www.VoteforLarrySnow.com for a more “in-depth discussion.”

Why Should I Be Re-Elected To The School Board?

A great question that demands honest answers and accountability. There are very different choices in this school board election in District 158. 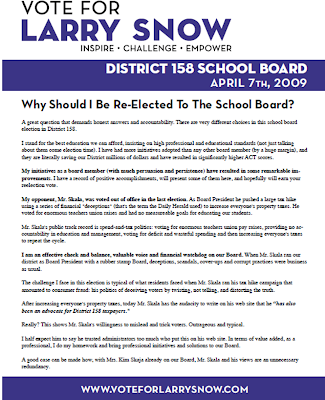 I stand for the best education we can afford, insisting on high professional and educational standards (not just talking about them come election time). I have had more initiatives adopted than any other board member (by a huge margin), and they are literally saving our District millions of dollars and have resulted in significantly higher ACT scores.

My initiatives as a board member (with much persuasion and persistence) have resulted in some remarkable improvements.

I have a record of positive accomplishments, will present some of them here, and hopefully will earn your reelection vote.

My opponent, Mr. Skala, was voted out of office in the last election. As Board President he pushed a large tax hike using a series of financial “deceptions” (that’s the term the Daily Herald used) to increase everyone’s property taxes. He voted for enormous teachers union raises and had no measurable goals for educating our students.

I am an effective check and balance, valuable voice and financial watchdog on our Board. When Mr. Skala ran our district as Board President with a rubber stamp Board, deceptions, scandals, cover-ups and corrupt practices were business as usual.

The challenge I face in this election is typical of what residents faced when Mr. Skala ran his tax hike campaign that amounted to consumer fraud: his politics of deceiving voters by twisting, not telling, and distorting the truth.

After increasing everyone’s property taxes, today Mr. Skala has the audacity to write on his web site that he “has also been an advocate for District 158 taxpayers.”

I half expect him to say he trusted administrators too much who put this on his web site. In terms of value added, as a

professional, I do my homework and bring professional initiatives and solutions to our Board.

A good case can be made how, with Mrs. Kim Skaja already on our Board, Mr. Skala and his views are an unnecessary redundancy.

Inside is a letter addressing the question. On the next page is Snow’s take on the differences between him and opponent Snow:

I insisted we spend our money wisely to positively impact our students’ education. My initiatives save D-158 millions of dollars. For 4 years I worked, proposal after proposal, getting too-expensive contracts rebid and better solutions put in place. We were paying ridiculous costs on contracts Mr. Skala publicly praised, (e.g. photocopier leases).

After analyzing budget details, I made sure we ended an unnecessary / expensive energy consulting contract Mr. Skala kept secret. (no info. to full Board) We no longer have a former board member as our health insurance broker. I insisted on a self-insurance program (like other large districts) be handled by a better professional organization.

The Bad and Oh So VERY Ugly

In 2002, he brazenly voted for a teachers’ contract where his wife, a D-158 teacher and union official, got over a 50% pay raise over four years. To pay for this incredibly expensive contract, he then voted for deficit spending and selling off our buses, replacing them with expensive leases.

To pay for his next too-expensive teachers’ contract, Mr. Skala’s tax hike scheme used a series of financial deceptions, amounting to the equivalent of consumer fraud.

As Board President, Mr. Skala had complete access to our lawyers’ advice and how Illinois consumer fraud laws don’t apply to referendum tax increase campaigns. Anyone who opposed his tax increase was labeled “anti-education.”

During his tax hike campaign, Mr. Skala could have truthfully told voters about:

Many residents, including myself at the time, asked Mr. Skala to get his facts straight. He refused. He / his tax hiking friends now praise “his integrity”, as if he should be canonized “Saint Skala”.

After Mr. Skala refused to listen and consider the facts I put in front of him, I publicly showed how his tax increase campaign was based on a fictional financial crisis. It did not exist.

More differences follow on the fourth page of the mailer:

Some More Examples of How We Differ

As lead or “chief” negotiator I stood up to the teachers union’s unrealistic annual pay raises. 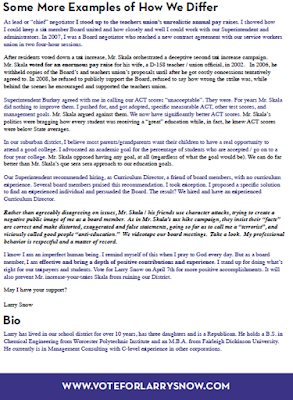 I showed how I could keep a six member Board united and how closely and well I could work with our Superintendent and administrators. In 2007, I was a Board negotiator who reached a new contract agreement with our service workers union in two four-hour sessions.

Mr. Skala voted for an enormous pay raise for his wife, a D-158 teacher / union official, in 2002. In 2006, he withheld copies of the Board’s and teachers union’s proposals until after he got costly concessions tentatively agreed to. In 2008, he refused to publicly support the Board, refused to say how wrong the strike was, while behind the scenes he encouraged and supported the teachers union.

Superintendent Burkey agreed with me in calling our ACT scores “unacceptable”. They were. For years Mr. Skala did nothing to improve them. I pushed for, and got adopted, specific measurable ACT, other test scores, and management goals. Mr. Skala argued against them. We now have significantly better ACT scores. Mr. Skala’s politics were bragging how every student was receiving a “great” education while, in fact, he knew ACT scores were below State averages.

In our suburban district, I believe most parents/grandparents want their children to have a real opportunity to attend a good college. I advocated an academic goal for the percentage of students who are accepted / go on to a four year college. Mr. Skala opposed having any goal, at all (regardless of what the goal would be). We can do far better than Mr. Skala’s que sera sera approach to our education goals.

Rather than agreeably disagreeing on issues, Mr. Skala / his friends use character attacks, trying to create a negative public image of me as a board member. As in Mr. Skala’s tax hike campaign, they insist their “facts” are correct and make distorted, exaggerated and false statements, going so far as to call me a “terrorist”, and viciously called good people “anti-education.” We videotape our board meetings. Take a look. My professional behavior is respectful and a matter of record.

I know I am an imperfect human being. I remind myself of this when I pray to God every day. But as a board member, I am effective and bring a depth of positive contributions and experience. I stand up for doing what’s right for our taxpayers and students. Vote for Larry Snow on April 7th for more positive accomplishments. It will also prevent Mr. increase-your-taxes Skala from ruining our District.

May I have your support?

Larry has lived in our school district for over 10 years, has three daughters and is a Republican. He holds a B.S. In Chemical Engineering from Worcester Polytechnic Institute and an M.B.A. from Fairleigh Dickinson University.

He currently is in Management Consulting with C-level experience in other corporations.