There were for Thorsen, fellow incumbent Ralph Dawson and CL Planning and Zoning Commissioner Carolyn Schofield.

Driving around after spring break, I saw more of that combination on yards.

Incumbent Dave Goss was clearly the odd man out.

I wondered if his fate would be the same as incumbent Howie Christensen’s two years ago. He was clearly on his own. 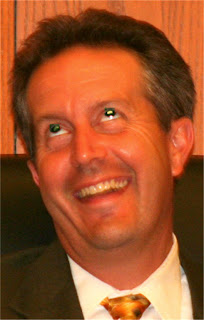 He was beaten by Brett Hopkins, a Planning and Zoning Commission member just like Schofield.

But after the mini-vacation, there was a new combination.

It was of the three incumbents.

Although Mayor Aaron Shepley has clearly shown his dislike for the way Thorsen has challenged him in the last two years, he wrote a letter to the Northwest Herald endorsing incumbents Dawson, Goss and Thorsen.

If you doubt his occasional disdain for Thorsen, take a look at this photo of Shepley rolling his eyes while Thorsen was talking. I used red eye reduction, by the way.

The debate was over the Crystal Lake watershed ordinance and Thorsen was clearing asking some questions that Shepley thought were a waste of time.

This photo gets a number of hits on McHenry County Blog because Google’s search engine for images displays it on top of the “rolling eyes” images. 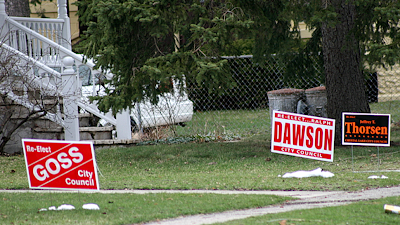 Shepley also has the signs of the three incumbents in his front lawn.

Maybe this is a case of

Across the street on Donna Kurtz’ front yard is the other combination.

You may remember that Thorsen and Dawson killed the McHenry County College baseball stadium re-zoning, while Schofield oppose the matter on the Planning and Zoning Commission (as did all the other members, which led to the requirement for 5 out of the 7 council members having to approve the rezoning for it to pass).

I am tempted to call this slate the “anti-baseball stadium” slate, but, when I asked one of my neighbors if that was the reason he was supporting the three, he told me it wasn’t. 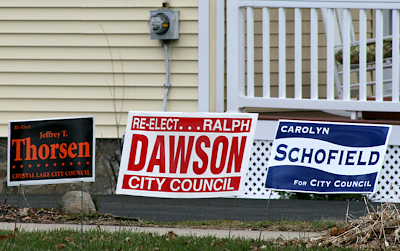 I know that another precinct resident as deeply involved in the effort to kill the baseball stadium as Kurtz has those same three signs up that are Kurtz’ front yard.

It will be interesting to see the elections for Algonquin 10, where Shepley is the Republican precinct committeeman.

If Goss loses the precinct that either means Shepley wasn’t really supporting him or he did nothing in his precinct.

From their sign placement, I conclude that all the other four city council challengers but Schofield are running on their own.

One, Mike Shorten put together a solid door-to-door campaign, as I mentioned Sunday.

Interestingly, no one ran an ad in the Northwest Herald.