When swearing in time comes, Carolyn Schofield will join her former commissioner colleague Brett Hopkins in the council chambers.

This is the second time for this engineer’s name has been on the council ballot.

She ran two years ago and placed sixth out of six candidates.

Schofield ran first, undoubtedly aided by her being first on the ballot and her being a woman. 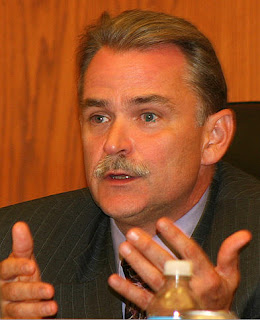 Goss, who placed fourth, was partially responsible for his loss in that he chose to file in the middle of the week, rather than at the beginning or at the end of filing.

That resulted in a less than ideal ballot position of fifth out of eight for Goss.

Of course, part of Goss’ loss might be attributed to his having voted for the 75% city sales tax increase. But, so did Dawson.

The other five candidates received the indicated votes:

Now, to the losers, I would suggest you take heart. Re-read the paragraph that says the top vote getter in 2009 was the lowest vote getter two years ago.

If you are a man, you can’t change your gender and get the five percentage point advantage that I am sure exists in this area, but you could get lucky and obtain first ballot position like Schofield did.

And you could be as determined to win as she was.

= = = = =
The winners appear from highest vote on down. Carolyn Schofield is on top, Jeff Thorsen second and Ralph Dawson third.