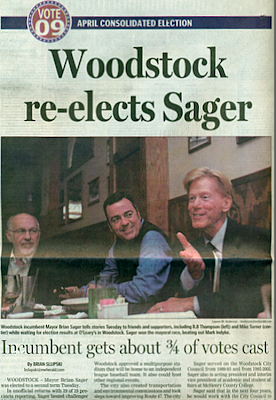 I pooped out about 4 AM last night with lots of stories undone.

So, I don’t want to be hypercritical about others who had earlier deadlines.

Before I even took my half cent Northwest Herald out of its clear plastic bag today, however, I saw the lead story was Woodstock Mayor Brain Sager’s re-election victory over Mark Indyke.

And, I didn’t even do a story on it before I went to bed.

I certainly did not think it was the top election day story.

Sager’s overwhelming victory (3-1 margin, 1,713 to 579) with no campaign visible from the outside didn’t seem important enough to me to write a story before bedtime. 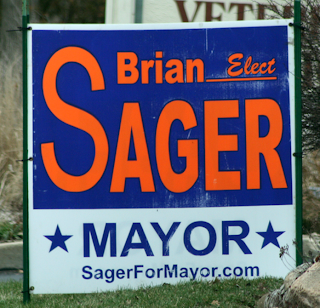 Why did the NW Herald editor think this one-sided contest was the most important story of the day?

I can’t figure it out.

Maybe it was just an easy article to plan for.

Maybe there’s more to it.

Maybe the Establishment in McHenry County has already decided that Sager should be the Republican candidate for state representative if incumbent Jack Franks decides to run for statewide office.

Am I being too conspiratorial?