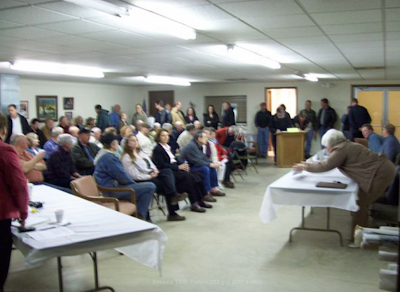 When 90 people come to a candidates’ night in a two precinct township, I guess one could assume something was up.

Something about renting out the township hall by incumbent Ersel Schuster.

Schuster was defeated by challenger James Kagel, a Democrat, by a preliminary vote of 500-216.

The backbone of Kagel’s campaign was former Democratic Party Chairman John Bartman and his mother Rosemary, a Seneca Township Trustee. John Bartman was hired by the Rod Blagojevich administration to work in the Illinois Department of Transportation.

Here is something I got via email about the meeting:

A bright pink flyer was sent to 1,200 homes in Seneca Township inviting everyone to a candidates forum for the thee road commissioner candidates and the two supervisor candidates.

Latecomers among the 90 who turned out, were left literally standing out in the
hallway.

The idea for this forum was started when a group of concerned residents were having breakfast out and decided it was time to let the candidates speak for themselves and end some misinformation that had been circulating in the township.

The forum began with the road commissioners.

Each candidate talked for a minute and then turns were taken answering written questions from the audience, with each candidate responding to each question.

The supervisors went next in the same fashion.

One topic of note was the subject of renting out the town hall. Kagel felt it was a bad idea because of the liability involved.

Supervisor Schuster responded by saying that the hall was the property of the voters and renting out the facility was their right. She explained that the liability issue could be addressed with a simple document that is easily created.
Schuster pointed out that the new addition was completed without any debt or tax increases.

The parking lot was filled beyond capacity and everyone was cordial.

Not much. If anyone would like to fill me in on the issues of the campaign, feel free.

Schuster also serves on the McHenry County Board, having been elected last fall.