“Ax your tax” seems to have been the sentiment of most tax hike referendum voters in McHenry County this election.

Voters in this recession were not kind to tax district officials’ requests for referendums to raise taxes on April 7th.

the missing precincts in Cook County must have been pretty negative. Elgin’s Courier-News is reporting a victory margin of just 29 votes. You have to see what the Elgin paper did for the referendum’s passage on Sunday. Click on the link. 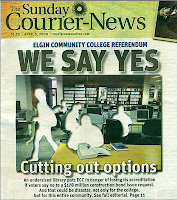 This is an excellent example of how limiting campaign contributions of non-newspaper owners will have a negative effect.

How could a private individual get as much impact opposing a referendum as the Elgin Courier did in its front page support of it.

McHenry County voters in the ECC district, coterminous with District 300, voted against it 1,162 to 798.

Cary Grade School District’s $17 million Working Cash Fund bond issue went down the tubes by a vote of 1,754 to 922. Almost two-thirds voted “No.”

The only referendum which the McHenry County Clerk’s web site shows passing is that of the Spring Grove Fire Protection District. It has a 10 vote lead. The tally, without including absentee and early votes, is 769-759.