I received this press release from Dave Brady of Wonder Lake, the president of the Illinois and McHenry Libertarian Parties.

McHenry County Libertarian Party is urging McHenry residents to join millions of libertarians and other advocates of economic freedom at one of thousands of “Tea Parties” being held on April 15. 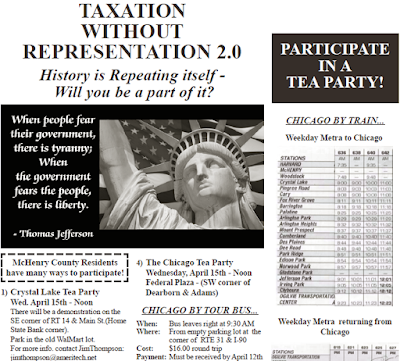 The “tea party” concept started with the Libertarian Party of Illinois (LPI)who began organizing a 2009 Tax Day ‘Boston Tea Party’ in Chicago back in December of 2008 and created a Facebook group for it on Feb. 10, 2009.

“Americans agree with the Libertarian Party that taxes and spending are out of control, and that bailouts and nationalizing industries destroys freedom and prosperity.

“The Libertarian Party is the only party supporting shrinking budgets, lowering tax burdens, eliminating deficits and getting government out of the way of recovery,” said David Brady.

“We will be joining other liberty minded McHenry residents for a demonstration at the intersection of Main Street and Route 14 in Crystal Lake between 12 noon and 1 pm on April 15. We plan to be on the southeast corner on the public sidewalk around the Home State.”