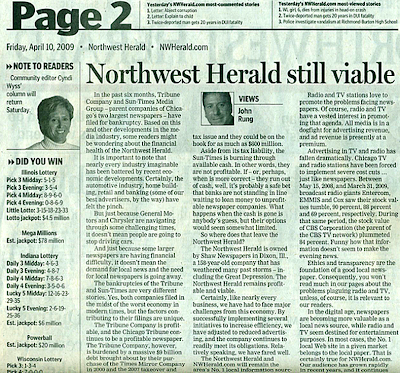 That’s was the headline under which publisher John Rung wrote readers on Friday’s page 2.

What an extraordinary headline and topic for the dominant, if staggering, daily newspaper of record in McHenry County.

Editorial writer Brian Slupski is now writing articles as a senior reporter. It’s my impression that he used to write the editorials, almost exclusively.

Reporters are covering about 3-5 times as many local governments as they used to.

The lack of longitudinal experience on the staff is epitomized in the lack of an obituary for former 18-year (1965-1983) McHenry County State Rep. Tom Hanahan (D-Johnsburg)…even after the Thursday Tribune headlined his death on its obituary page.

Do you see anything wrong with this analogy offered up by Rung?

“…just because General Motors and Chrysler are navigating through some challenging times, it doesn’t mean people are going to stop driving cars.

He is, of course, correct that people want local news. Whether they will want newspapers is a question still outstanding.

It is just sad that the NW Herald can’t cover the really good stories that are out there.

But with the newspaper giving away subscriptions for just over one-half a cent apiece at business expos, it does appear the value placed on this one is quite a bit less than the 75 cent masthead price.