Yesterday there were four Barack Obama supporters among the hundreds who showed up to the TEA Parties in Crystal Lake and Cary. 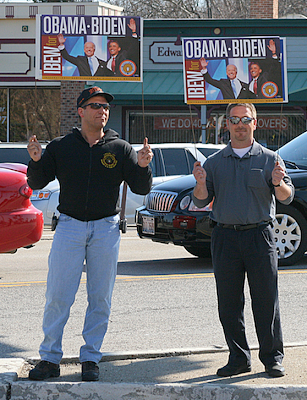 The two standing on the traffic island at the main corner in Cary were proud members of the IBEW. I observed,

“There were two misplaced Obama supporters standing on the traffic island next to the railroad crossing. They were electricians whom I suppose were not working on tax payment day.”

Regular reader and commenter Rusrus quoted that part of the article in his comment, the rest of which follows:

“Or is this just another ham-handed attempt at your anti-Democratic humor?

“I’m sure the teabaggers have a better idea, right? Oh, no taxes? What a good idea – we can pay the bills of the country with racist epithets.”

As I mentioned in my reply to his comment, humor apparently doesn’t work in blogging anymore than it did when I was in elective office.

“Yeah Cal I must concur- Not only is the ‘not working’ jab hypocritical it makes no sense- none of these people are working. And you catch yourself in a lie- didn’t an earlier ‘invitation’ say that everyone was welcome? So what made these two misplaced?” 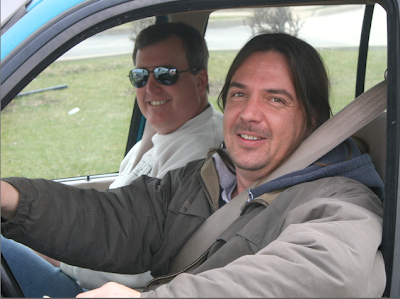 There were two other Obama supporters (seen above) at the Crystal Lake rally, but they couldn’t stick around after putting up the two signs downstream (seen below) from the hundreds of demonstrators.

Republicans must
think Americans
are stupid!

The other focuses on FOX News, surely the more effective critic of the Obama Administration:

I suspect that the Libertarians present would have insulted by being left out, if they had seen the sign. 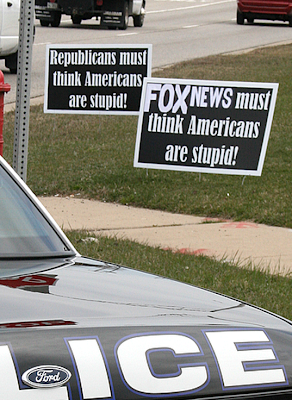 The two said they had to get back to work. Perhaps that is what triggered my comment on the two Obama supporters in Cary. There was a stack of the signs in the back of their vehicle.

I asked if they minded my taking their picture for McHenry County Blog and they said I could, asking if they could provide a comment. You see it below: 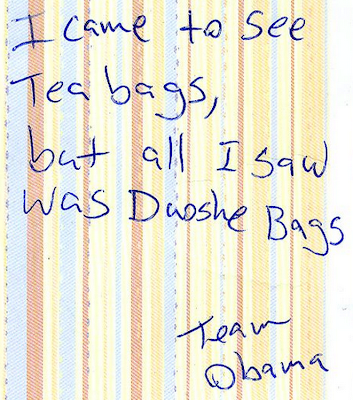 Above you can see what they wrote. The commenter did say I might have to check out the spelling of “duoshe.” Spell check tells me he is correct.

Checking further, I find the question,

“Do you mean douche bag?”

Here is the message these Team Obama members wanted you to read:

“I came to see tea bags, but all I saw was duoshe bags!

I am perplexed at this end of Rusus’ comment:

“I’m sure the teabaggers have a better idea, right? Oh, no taxes? What a good idea – we can pay the bills of the country with racist epithets.” 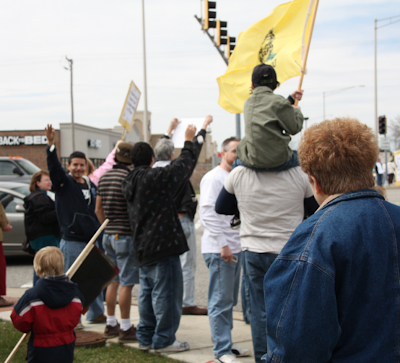 The guy on Route 14 waving at the camera above certainly appears to be Latino. (Click to enlarge any photo.) 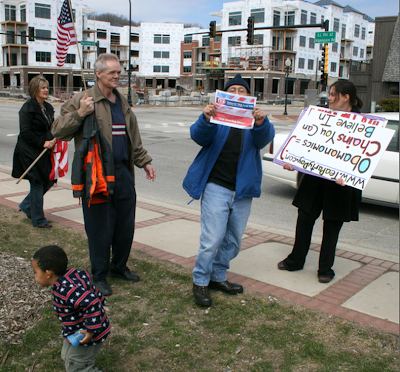 And I know the guy holding the little sign in Algonquin is Latino. He’s Pete Castillo and used to be my legislative assistant. 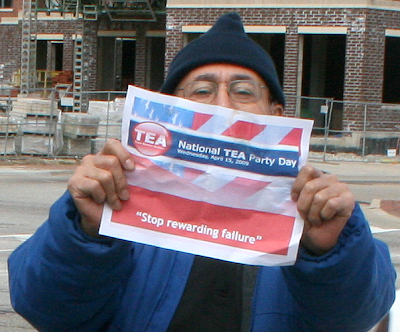 That is an official TEA Party sign he is holding 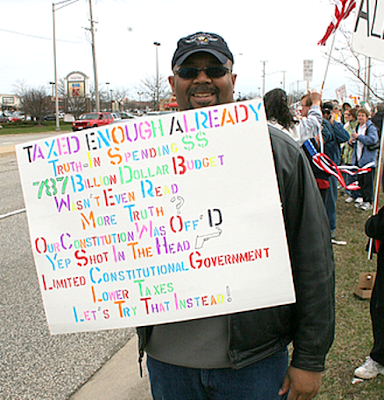 This color blind guy is not even going to try to reproduce the colors on his sign. Note the pistol next to the line “YEP SHOT IN THE HEAD.”

The first stories on McHenry County’s three TEA Parties can be found at the links below: