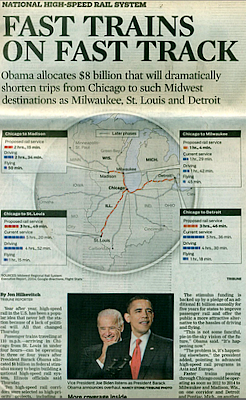 Monday Rockford-area (and McHenry County) 16th District Congressman Don Manzullo tried to get President Barack Obama and his Peoria-based Secretary of Transportation Ray LaHood to allocate some high speed rail money to a Chicago route that would include Winnebago County.

No success on that pitch, though.

Look at the map on the front page of the Chicago Tribune today. (Click to enlarge.)

Madison is relatively close to Rockford, but the route is from Chicago to Milwaukee to Madison.

Wisconsin wins big in this derby.

Illinois doesn’t do poorly, at least for those who want to go between Springfield and Springfield.

The route goes all the way to St. Louis, but I have a hard time relating to the part south of Springfield.

The summary about a high speed train trip to St. Louis says it will take 3 hours and 49 minutes to get from Chicago to St. Louis. 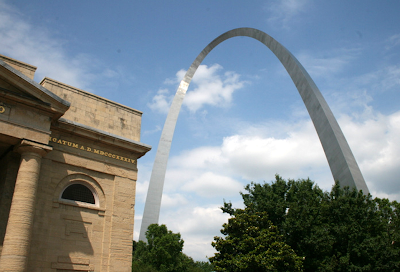 No ticket price is suggested in the article.

But for those of us in the far Northwest ‘burbs, it would take at least and hour and half to get to Union Station in Chicago. 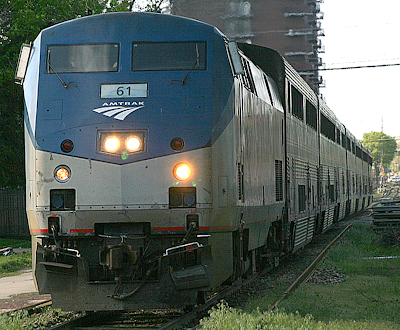 Versus 4 hours and 52 minutes by car.

Kind of tough to read in a car…unless one can convince one’s spouse to drive…as I always try to do.

It takes me four hours to drive to Springfield and about another 1 and a half to get to St. Louis.

In the end mode of transportation comes down to a cost-benefit analysis.

An alternative has to be as convenient and comparably priced.

Ignored even though our citizens voted for Obama.

That’s the way it goes.

= = = = =
The Amtrak train you see is rocking through Downtown Springfield, Illinois, on some of the worst track imaginable.