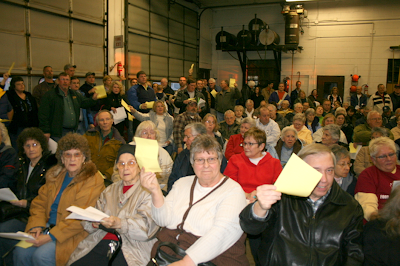 I ventured into the courtroom of McHenry County Judge Michael Caldwell yesterday to hear arguments over whether the Grafton Township Board should be allowed to build a new $3.5 million (plus over $1.5 million in interest) township hall and garage on Haligus Road in Lake in the Hills.

Yesterday was the hearing to decide whether the preliminary injunction should be made permanent.

Prior to the Republican primary election in which Moore won, township electors filed a petition asking for a referendum on whether or not to build a new town hall.

Two days after the primary election, the township board scheduled, then, canceled a meeting. 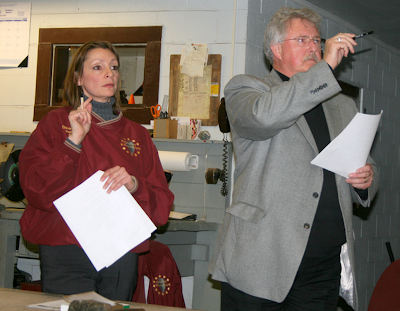 After the April 7th general election, the annual town meeting was held at which the tie vote of 70-70 resulted on a motion to build a new township hall. Because of the tie vote, the motion was announced to have failed.

A second vote to authorize the board to enter into construction contracts passed 70-64, as six new township hall opponents had left the meeting between that vote.

With the original judge in the case, Maureen McIntyre, out of the courthouse, her work was assigned to Caldwell.

Township Attorney Jim Kelly tried to convince the judge that Township Moderator Scott Breeden’s ruling that the 70-70 tie vote did not fail by arguing that those abstaining should be counted with those voting in the affirmative. Township Clerk Dino Frigo testified that 159 electors and 18 visitors signed into the meeting.

He had Frigo testify that Township Road Commissioner Jack Freund, his wife and another person had not voted.

“Were electors told by anyone if they did not vote that they would be considered in favor of that resolution?”

“The voters were there to vote.”

“Were electors told by anyone if they did not vote that they would be considered in favor of that resolution?”

“The moderator did not tell them that.”

Later Bishop referred to the argument that abstentions should be counted in the affirmative as “nonsense.”

There were also intriguing arguments punctuated by Clerk Frigo’s not being able to find anything in the minutes saying that either the township board or the electors at an annual town meeting had voted to build a new town hall.

“Is there any other reference in these minutes to the construction of a township hall?”

“I can’t find anything.”

(I would have liked to be able to show you a picture of her flipping through the pages of the minutes in her unsuccessful attempt to find any reference to the township board or electors’ having approved the building of a new township building, but, as you know, cameras are not allowed in McHenry County courtrooms.)

The 2007 annual meeting minutes said the purchase of land and the building of a “site” had been approved.

Township Attorney Jim Kelly tried to rehabilitate (my term, not his) the minutes by eliciting from Frigo what Frigo should have written.

He argued Frigo had made a scrivener’s error.

Counsel for Dan Ziller, Jr., Jim Bishop successfully objected, pointing out the minutes were the official record of the 2007 meeting.

Judge Caldwell observed there had been adequate opportunity to correct the minutes.

Kelly made the same attempt to get the motion on the court record with Township Supervisor John Rossi, who made the (apparently mis-reported) 2007 motion everyone (mainly township officials, it seems) at that meeting supported.

He was apparently ready to use Township Trustee Betty Zirk, but decided to forego the opportunity after not gaining traction with Frigo and Rossi.

The judge ruled that the minutes represented what happened at the 2007 annual meeting.

Bishop argued that township citizens would have no idea that a vote on building a township building would be taken on the July 17, 2008, regular township board meeting at which debt certificates for $3.5 million were authorized. 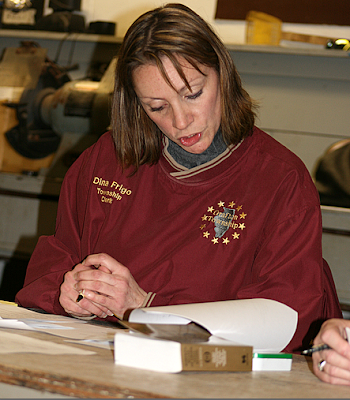 “No individual could determine that construction of a township hall would be discussed,” he said.

“The agenda didn’t at all indicate the construction or purchase of a new (township hall, did it)? There is not such a reference, is that correct?”

“The purpose of an agenda is to advise the public as to what will occur at a meeting?”

Bishop also put forth that the referendum 109 electors petitioned for in February of this year would have to be held prior to construction of the township hall.

Kelly’s argument was that the statute governing debt certificates (the Local Government Debt Reform Act and the Omnibus Bond Act which incorporated that law) gave the township board the authority to build a new town hall.

I don’t want to misstate what he said, but it seemed to me that it was the public notice of the regular township meeting, although not stating that approval of a new township hall would be on the agenda, was adequate and legally sufficient.

Judge Caldwell wanted to know whether Dillon’s Rule had been violated. Dillon’s Rule says that local governments can’t do anything they are not authorized by state legislation to do.

“The real question is (whether) they have acted lawfully?” he said.

Kelly said the acts he cited gives the township board the power to construct a new township hall.

“There’s no regulation that you give the narrative of what’s in each ordinance (on the agenda),”

he said in rebuttal to Bishop’s argument that the public had no notice of the approval of a new township hall.

Kelly did admit that “in 2007 the electors voted on it, albeit not in a clear manner.”

Commenting on Bishop’s argument that

“the electors’ authority trumps the authority of the township board,”

“That’s just not the case.

“If they want to have a referendum, God bless them. The clerk will put it on the ballot for the next general election.”

“That bond before you requires no additional taxes.”

I would refer you to this “Message of the Day” for a rebuttal which Bishop was not able to pry into the record.

“Taxes will not be raised above the Tax Cap,” Kelly continued.

“What was the function of the vote at the town (meeting)?” Caldwell asked.

“It is was advisory,” Kelly replied.

In his conclusion, Bishop rebutted Kelly’s argument that because the project had already started ($288-300,000 has been spent of which $99,000 was for the 3 acre site, according to Rossi’s testimony), that it should be allowed to continue.

The case cited was supported the argument that the doctrine of laches should apply, but Bishop argued it concerned a situation where everything had been out in the open, not the situation with the new Grafton Township Hall.

“They don’t have the underlying authority to build a township hall,” Bishop said.

“There are no notices applying,” Bishop stated.

“(This is) the biggest thing this township has ever done.”

Regardless, Kelly argued the court the township had such authority and the court had no authority to enjoin this “legislative action” of the township board, even though early on Caldwell had suggested the township lawyer had waived that argument by not bringing it up at the first hearing before Judge McIntyre.

A ruling will be announced next Monday.

= = = = =
The top photo shows the vote when Scott Breeden was being elected moderator of the Annual Town Meeting.

Breeden and Grafton Township Clerk are shown counting the vote that ended in a 70-70 vote tie.

Grafton Township Clerk Dina Frigo’s head is seen next to some of her testimony.

Below are Dan Ziller on the left and Dan Ziller, Jr.,on the right. Both attended the session.

A drawing of the town hall can be found near the bottom of the story.

Besides Frigo, Rossi and Zirk, Linda Moore’s successful running mate for township trustee, Jerry McMahon, was present in the courtroom in support of the new township hall.