The last time such a briefing was held by the McHenry County State’s Attorney Office, the board most in need of hearing the advice, not to mention following the law, the McHenry County College Board board was meeting at the same time.

When State’s Attorney Lou Bianchi sued the MCC board for violating the Open Meetings Act, the board, after spending an amount it refuses to reveal, settled out of court.

Well, at least former President Walt Packard is not going to be around to send me threatening letters. But, he’s been given over a $250,000 going away present by being kept on the payroll from his resignation to June 30, 2010. 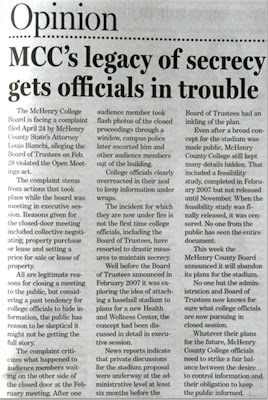 Louis A. Bianchi, McHenry County State’s Attorney is pleased to announce a seminar for Elected and Appointed Officials to be conducted May 14, 2009 from 7:00 p.m. to 9:00 p.m. at the McHenry County College Auditorium.

This seminar will provide particularly useful information for both newly elected officials and incumbents as it will encompass the requirements of these Acts as well as recent updates in this important Legislation that works to provide transparency in Government.

= = = = =
The woman taking notes in the photo on top is Iris Bryan. Jane Collins can be seen in the background in the first picture. MCC security officer William Schultz reparing the evict those legally standing outside the late February 2008 meeting where John Maguire of BMB Communications Management made his first pitch to buy college property to build a mega-tower.

The editorial is from the late, lamented Algonquin Countryside and Cary-Grove Countryside, weekly newspapers that stopped publication last December.