I posted the article below on McHenry County Blog late last night. It had such an effect on me that I woke up in a start dreaming my 11-year old was saying,

I just wrote a check for the Camp I Am Me, formerly called the Burn Camp, about which the following was written.

I went to the grand opening of the Huntley Super Walmart this week and found lots of license plates not regularly seen around Crystal Lake. 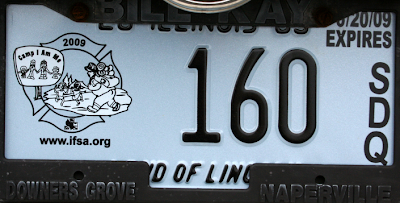 Today’s is a commemorative plate that can be displayed only 60 days. You can see it expires on June 20th.

It commemorates the summer camp that the Illinois Fire Safety Association puts on.

The president this year is Huntley Fire Protection District Chief James Saletta , so maybe this plate was on his car.

It used to be called the IFSA Burn Camp, but, starting this year, because of a comment from one of the campers that the Burn Camp name did not help them escape from being a burn victim and just be a kid for a change, the name is being changed to

Camp I Am Me

describing the purpose of the camp, one of the fireman wrote,
“It is also the intent of the IFSA to allow kids to be kids.

“It’s an opportunity for them to spend time with other children and adults that are just like them.

“It is always interesting to see the children show up on the first day of camp with their long sleeve shirts and long pants, even though it’s 90 degrees in the shade.

“As the week goes on, you can see the campers wearing shorts, tee shirts, and swimming suits.

“This is one of the most obvious signs that camp is allowing kids to be just another kid.

“For one week a year they don’t have to worry about people starring or being different.

“Well, it took this young camper’s comments for us to realize that we were inadvertently placing label on the children that we were working hard to erase.

If you would like to contribute, you can find out here. You can find how to volunteer at the camp on this page. The address is Huntley Fire Protection District, P.O. Box 517, Huntley, IL 60142.

The camp is held the third week of June at the YMCA Camp Duncan near Fox Lake in Ingleside, Illinois.