After publishing my Island Lake Pig Farmer Pigapalooza story, I was informed by Bob Wargaski that it was not a “victory party,” as I wrote.

I’ll let him speak for himself in his email, which is below:

“Actually it was not.

“What I discovered was that when people go to village hall meetings it can be intimidating, to stand up and ask questions from the audience.

“So I thought why not invite the electorate and constituents to a casual atmosphere. I was very careful not to let it be construed in any other way. 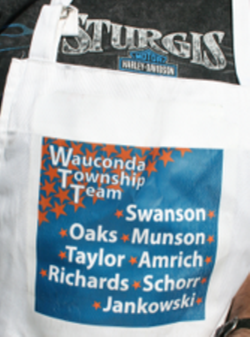 “What I did was to invite all the newly elected representatives and current village officials from Lakemoor, Volo, Wauconda, Island Lake, Wauconda Township, Nunda Township and Moranine Sanitary District to come out and let their constituents chat and talk to them while chewing on pork and potatoes with a beer to discuss the pork our government is spending.

“My issue with Island Lake is done and over, the event had nothing to do celebrating and type of victory.

“The amount of my money and taxpayer money spent is nothing to celebrate.

“Actually it is a sad issue what the previous Island Lake government did.”

Now that I think about it, Wargaski told me how he had invited various local officials. And I remember meeting some.